The 2022 Toyota Tundra has a ton of notable features, but one of the most interesting is its all-new Audio Multimedia system, which will eventually find its way to other models as well.

It’s a radical departure from the company’s previous infotainment systems as it embraces connectivity, speech recognition technology and the trend for larger displays.

Speaking of the latter, the Audio Multimedia system in the Tundra will be available with 8- and 14-inch displays, with the latter being larger than those found in the Chevrolet Silverado and Ford F-150.

Also Read: The 2022 Toyota Tundra Is A Tougher, Twin-Turbo’ed Pickup

The 14-inch display makes it easy to read information with a quick glance and many functions can be controlled with your voice thanks to a new Intelligent Assistant. Billed as a virtual companion, the Intelligent Assistant responds to a variety of wake words – including “Hey/Hi/Hello/OK Toyota” – and answers natural language requests such as finding nearby restaurants or gas stations. While that isn’t too unusual, the system uses Google Points of Interest data, which should ensure the information is correct and up-to-date.

Furthermore, the Tundra is equipped with two microphones and the system can determine if the driver or front passenger is making the request. This is helpful as the front passenger can tell the Intelligent Assistant they’re cold and this will only adjust the climate control system on their side.

The dual microphones also have another benefit as two Bluetooth devices can be used simultaneously. This means the driver can be on a call with one person, while the front passenger is talking to someone else.

The system also features cloud-based navigation with real-time information. While this means you’ll need to sign up for yet another subscription, your maps should always be up-to-date.

Since mobile data can be hit or miss in remote areas, there’s an offline mode that automatically downloads around 50 miles (80 km) of map data when you’re approaching areas with low connectivity. There’s even a navigation handoff function, which will provide last mile directions after you park the truck.

The Audio Multimedia system supports three different user profiles, which save your preferred audio and climate settings – among other things. The system will automatically recognize each user via their smartphone or smart key, so the process of logging into your husband’s or wife’s vehicle should be pretty straightforward. Speaking of spouses, there are PIN codes to help protect your privacy. 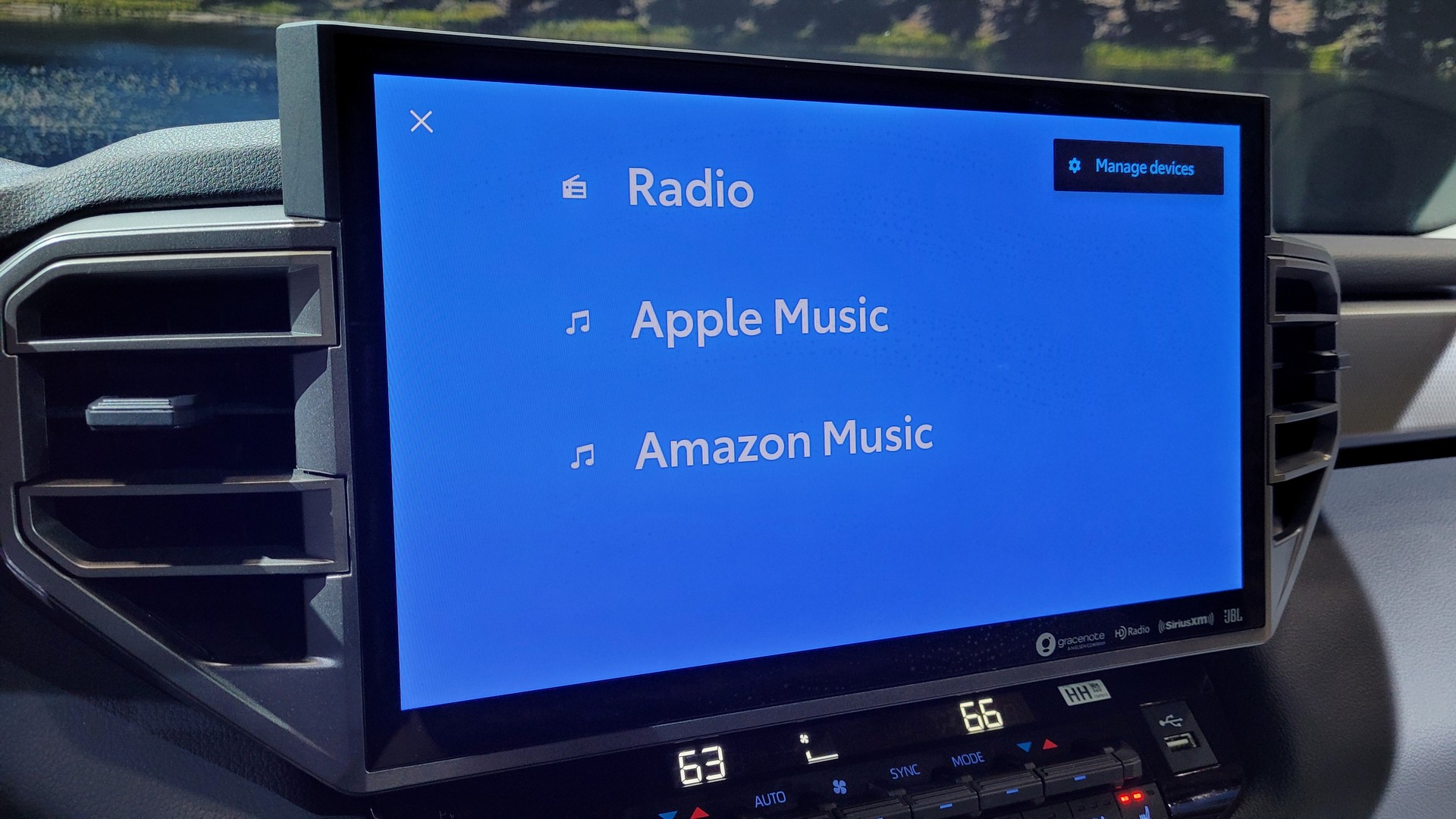 Getting back to connectivity, the truck has built-in support for Apple Music and Amazon Music as well as Wi-Fi. The infotainment system also supports over-the-air updates and Remote Connect functions such as locking / unlocking doors, starting the engine and honking the horn. There’s also Safety Connect and Service Connect features, which can connect drivers with an emergency response agent in the event of an accident as well as provide owners with personalized maintenance updates and vehicle health reports.

The Audio Multimedia system is similar to the new Lexus Interface, but this was the first time we actually got to use either system ourselves. It makes a good first impression as the system features modern graphics, smartphone-like responses and excellent speech recognition technology.

The system is also reasonably quick and the Intelligent Assistant seems promising. However, there are downsides as users can expect a steeper learning curve and some features – such as selecting a place on a map by touching it – proved difficult. However, the latter issue could potentially be addressed by an update and the Tundras we explored were technically prototypes.

The 2022 Toyota Tundra will arrive at dealerships later this year and, in the meantime, check out our in-depth coverage of the truck as well as its rugged TRD Pro variant.