Tories know Johnson lost them North Shropshire. They may now dispense with him | Katy Balls 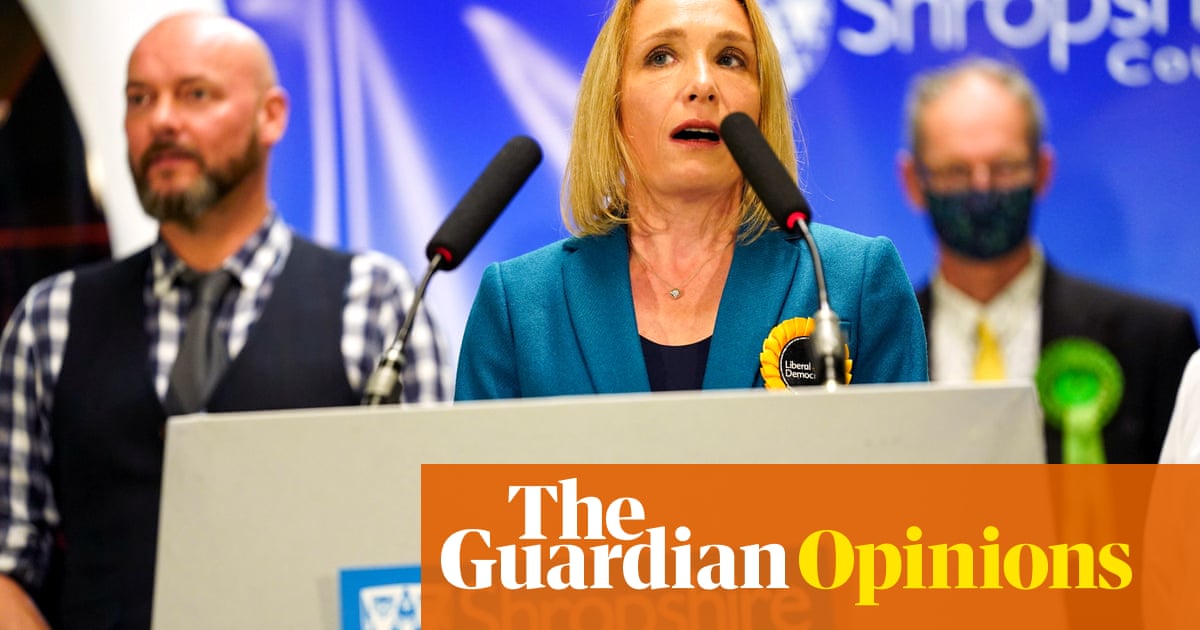 After the local elections in May, cabinet ministers and supporters of Boris Johnson were keen to talk up a new decade of “Johnsonism”. The idea was that the Tories taking Hartlepool from Labour in the byelection was proof that the 2019 Tory electoral triumph was no blip. Instead, it was part of a wider political alignment that could see the prime minister outlast Margaret Thatcher.

Following the result of the North Shropshire byelection, that hypothesis is looking rather optimistic. Overnight the Liberal Democrats have managed to overturn a majority of over 20,000 in a seat that has been Tory since its creation. What’s more, the Lib Dems did so with votes to spare – earning a majority of 5,925.

Given the Lib Dems only came third in the seat in 2019 – with Labour second – it is more than a shock result. The polling expert John Curtice has described it as 8.5 on the Richter scale. In other words, a political earthquake.

It points to problems ahead both for the Conservative brand – and Boris Johnson’s own position. For the prime minister, it caps off a miserable month in which he has found himself under fire over Tory sleaze, Covid restrictions, “partygate” and general questions about his Downing Street operation.

Ever since the byelection was called, there were concerns in Conservative campaign headquarters over the vote. Given it was sparked by Owen Paterson’s decision to quit the Commons following a botched attempt by No 10 to spare the Tory MP a suspension over a breach of lobbying rules, it was vulnerable to an anti-Tory protest vote.

But what worries those Tories who have been out canvassing is that sleaze only came up occasionally. Instead, the complaints from voters that the Conservatives once relied on in the area pointed to a wider dissatisfaction with the party, and more specifically the prime minister.

As in Chesham and Amersham – which the Lib Dems also took from the Conservatives – traditional Tory voters complained that they were being taken for granted by this government. There is a feeling that “levelling up” has little to offer agricultural constituencies such as North Shropshire. What’s more, this result suggests that the factors that helped the Tories cruise to victory in 2019 are going fast. In a constituency that voted to leave, Brexit is a much less potent issue than it was two years ago.

Rather than Paterson, the issue that came up more regularly early on on the doorstep was Johnson’s rambling CBI speech to business leaders in which he waxed lyrical about Peppa Pig World. “They kept saying he just wasn’t a serious person,” says one Lib Dem working on the seat. To those in CCHQ, the focus on Peppa Pig didn’t come as a huge surprise – it chimed with their own intel.

As the campaign progressed, the conversation turned to “partygate”. Despite attempts by ministers to write off allegations over alleged breaches of Covid rules in Downing Street last year as a Westminster bubble story, it became a live issue on the ground. “We were shoring up the vote and then the party video came out. We were done,” says one Tory staffer of the impact of the Downing Street video leak of No 10 staff joking about a party.

One Tory supporter tasked with phone canvassing started to worry when not a single person they spoke to said they planned to vote Tory. The only glimmer of hope they had was that some supporters had opted for postal votes so backed the party before it all kicked off.

Ahead of polling day, there was talk that a Tory loss could trigger a vote of no confidence in Boris Johnson. There is clear anger among MPs, with John Redwood taking to social media to say it’s time for the government to “listen to Conservatives”. However, senior Tories are telling colleagues now is not the time for a leadership contest. The fact that parliament has now risen for Christmas ought to give Johnson breathing space. “Everyone is furious, but they are also now at home so hopefully there can be a moment of reflection,” says one Tory MP.

But what if that moment of reflection leads MPs to conclude that Johnson has gone from being a voter asset to an electoral liability? The prime minister’s remaining allies argue that this is a mid-term blip – that it is more common for the governing party to lose byelections than to win them. There were also local issues that played a factor.

But after a tricky few weeks for Johnson, it is impossible to separate the prime minister from the result. Tory MPs believe he was a key factor on the doorstep. The result points to issues in a general election. While byelections are more vulnerable to protest votes, the North Shropshire vote shows how tactical voting has the potential to wound the Tories at the next election.

There is a particular concern among those MPs in Lib Dem-facing seats, of which there are around 50. But the problem goes further. “If we can’t keep a majority in a true blue seat that voted heavily to leave, where can we?” asks one frustrated Tory MP.

Most immediately, the North Shropshire byelection is a problem for Johnson’s own authority. His MPs have been willing to begrudgingly put up with things they don’t agree with – such as tax rises and Covid restrictions – when they believed Johnson had the support of the public. If they start to see him as the central problem, the calculation will change. Johnson will find it even harder to get his agenda through.

Already Tory MPs from across the party are openly discussing whether he can really lead them into the next election. As the prime minister takes a break over Christmas, he will need to use that time to work out how to regain the support of his party. Otherwise, 2022 will be his most turbulent year yet.