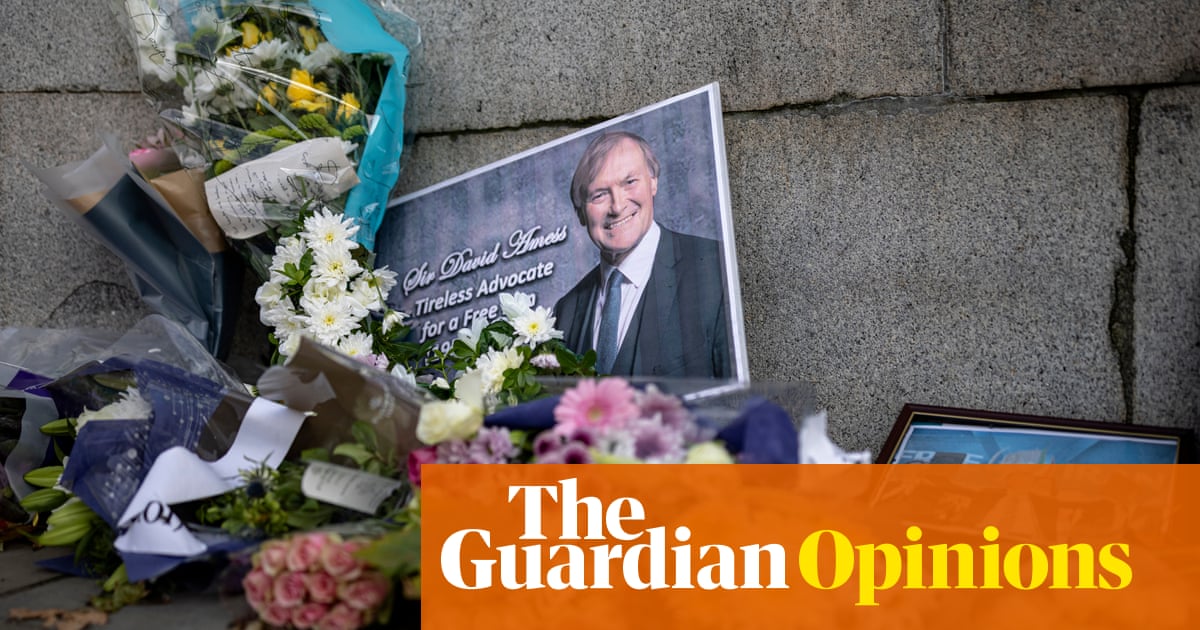 In the week since Sir David Amess was killed, many people who did not know the man have learned something about his work. Beneficiaries of the causes for which he campaigned have illuminated one of the more neglected parts of Britain’s democratic constitution – the work that MPs do in their local communities. The constituency link is an umbilical connection that oxygenates the Commons as a representative chamber.

That function is under threat when MPs do not feel safe in their surgeries or on the streets. The chill of vulnerability afflicts MPs’ families and staff, local councillors and anyone who serves on the political frontline, which is a metaphor that should never have come to describe a literal threat.

Wishing for a more secure environment is easier than constructing one without erecting barriers between politicians and the people who elect them. Police officers and screens at MPs’ surgeries may be necessary to pre-empt violent assaults, but each degree of physical separation reinforces the division between two worlds that should, when democracy works properly, be joined.

Finding the balance between security and openness is not easy. The challenge touches every detail of the political process, down to the issue, raised by a decision of the parliamentary watchdog this week, of redacting personal information from published MP expenses receipts. The public have a right to know how their money is spent, but perhaps not to know the exact addresses of hotels where MPs stay on visits.

It is important to distinguish between types of threat. In the wake of last week’s attack there has, understandably, been much focus on the coarsening of political discourse and the increase in casual abuse of politicians, online and in person. Casual in this context does not mean harmless. Death threats, rape threats, the most extreme racism – the volume of it can be overwhelming and traumatising. Those on the receiving end have no doubt that social media, and the cloak of anonymity it can provide, have made the problem much worse.

But anonymity also has benefits for a democracy. It can give cover for whistleblowers and security for vulnerable people reaching out for help. It can allow frightened people without power to find their voice. By contrast, much of the dehumanising rhetoric that normalises political violence is spread not anonymously, but by people who crave attention through notoriety and perform their hatred openly.

The digital realm is a breeding ground for extremism, while social media companies are in denial about the extent to which their business models are lubricated by streams of vitriol. But there is also a necessary distinction to be drawn between incivility, which corrodes political decency, and ideologies that actively reject democracy. Early reports suggest Sir David’s alleged killer might have been motivated by jihadist doctrine. Jo Cox’s assassin was a white supremacist. It would be a category error to conflate acts of terrorism with the generalised degradation of political debate.

That doesn’t mean there is no connection. Embittered citizens in an atomised and mistrustful political culture might be more susceptible to radicalisation. But that dynamic cannot easily be measured, nor fixed with a single law. It is a function, among other things, of declining trust in institutions and depleted social solidarity – problems that have built over decades.

The complexity of the challenge is not cause for despair. The evidence of the past week alone demonstrates an appetite for more civil politics that allows for the expression of different beliefs within a recognition of common democratic enterprise. It is the invigoration of that spirit, alongside good works in his constituency, that can and should stand as Sir David’s enduring legacy.