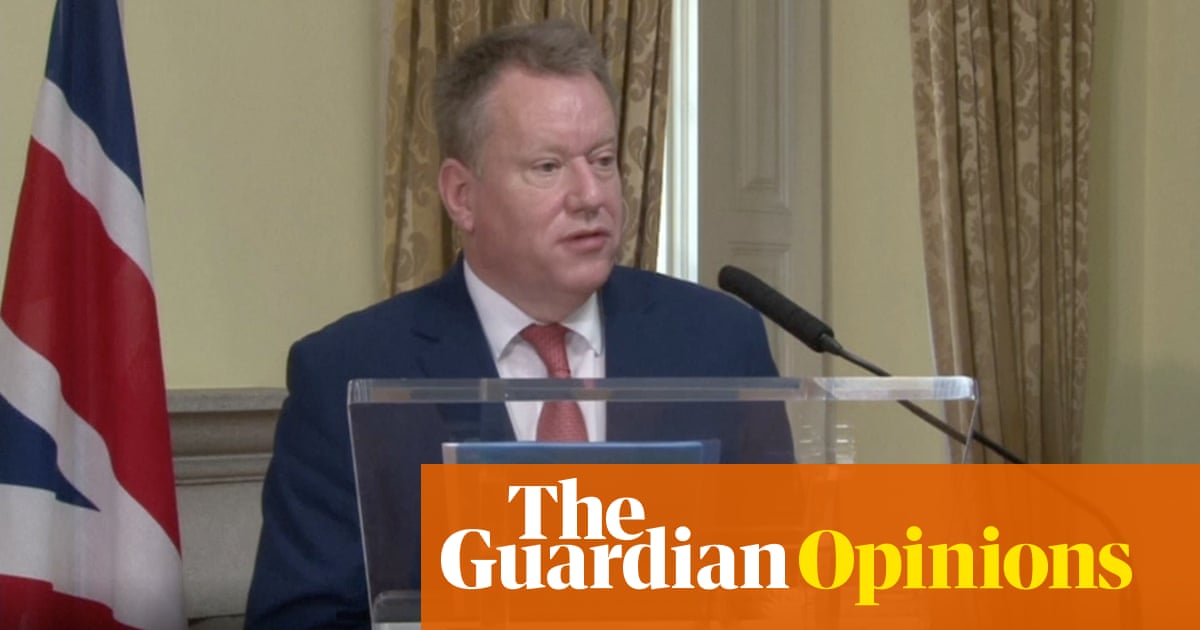 Everyone in UK politics has been on a Brexit journey, but some have travelled further than others. On the eve of the referendum, David Frost was chief executive of the Scotch Whisky Association and unconvinced by arguments for leaving the European single market. “Even the best-case outcome can’t be as good as what we have now,” he wrote in June 2016.

Five years later, Lord Frost is the cabinet minister for making a hard Brexit harder. In that capacity he made a speech on Tuesday rejecting the Northern Ireland protocol of the withdrawal agreement that he was proud to have negotiated two years ago, and proposing a new text instead.

Frost’s speech was a whinge disguised as a hymn to national self-determination. The root of his frustration is that Northern Ireland is still in the single market (with benefits that were obvious to his younger self). It is the single market that allows EU members, via frictionless borders, to achieve the collective economic heft that Eurosceptics underestimated before the referendum and now resent.

The rules have to be enforced at a border somewhere, and adjudicated by a court. In deference to the Good Friday agreement, the UK recognised that no hard border should be reimposed on the island of Ireland. That principle is spelled out explicitly in the preamble to the protocol – a legally binding treaty – that Boris Johnson signed in January 2020. Customs checks, made necessary by Johnson’s Brexit model, were diverted instead to Irish Sea ports, infuriating Northern Ireland unionists, who saw the new frontier as a precursor to constitutional severance from the UK. Johnson’s response was to deny the existence of a border and boast that his deal was a triumph.

Now Downing Street takes the view that it was a terrible deal after all, foisted on Britain by spiteful continentals who, egged on by devious Dublin, bamboozled Theresa May into agreeing that Brexit created a moral conundrum around Northern Ireland. It was, in Brexiteer eyes, a scam. Brussels picked a portion of sovereignty from Britannia’s back pocket as she fled to freedom.

Specifically, the EU’s court of justice still has authority over single market compliance in Northern Ireland. Frost wants that ended. Otherwise, Brexit will not be fully done. His speech was a threat veiled in a promise: give back the filched sovereignty and a new era of happy UK-EU cooperation can dawn. Alternatively, Britain will invoke article 16 of the protocol – the clause allowing unilateral suspension of the agreement.

General buyer’s remorse does not constitute the kind of emergency envisaged in the treaty as justification for that action. But that is a point for lawyers to dispute and Johnson to ignore. Article 16 is a process not an event. It starts trouble and ends nothing. Triggering it would be a gesture for a domestic audience, followed by a cascade of ugly consequences.

Britain would refuse to implement Irish Sea border checks, daring Brussels to police its rules on some other boundary or not at all. That would be a dereliction of duty to the Good Friday agreement and an act of raw economic and diplomatic aggression against Ireland, which, in the absence of UK cooperation, would be saddled with the problem of non-compliant goods leaking by land into the single market.

The dispute could escalate to trade sanctions, which Johnson would narrate as an enemy blockade. Shortages and job losses could slot into the established Brexit script as a siege, requiring yet more blitz spirit and relishing of allotment turnips over imported delicacies.

Is a deal available? In theory, always. But it does not bode well that Frost’s speech was timed the day before the European Commission publishes proposed adaptations of the protocol. He knows already that his demands will not be met, yet he pre-emptively underscores them in thicker red. That is not the choreography of compromise.

One problem is the Brexiteer revision of history. Johnson and Frost believe that playing hardball with the EU worked in 2019, to get the withdrawal agreement, and again in 2020, to get a free trade deal. Their view is that the European Commission only budges when Britain charges at cliff-edges. The logic is flawed. It starts from the premise that deals reached at the 11th hour by the most reckless methods were genuinely good ones. The fact that the government is already reneging, and insisting on rewrites, rather proves the opposite.

The demand to end European court jurisdiction signals that Johnson is not serious about the protocol. He knows that the single market and the court are one package. Frost is asking to erase a fundamental basis of all Brexit negotiation, resetting the clock to June 2017, expiating May’s original sin in accepting the primacy of the Irish border issue; retracting Britain’s concession that it is any kind of issue at all.

I have spoken to ministers, diplomats and officials who have worked with Johnson and they say, with one voice, that he has no interest in the detail of his deals and does not consider his signature on them to be binding. As one former cabinet colleague puts it: “Boris doesn’t give a stuff about Northern Ireland.”

The only strategy is the usual Johnson method of starting fires, making himself scarce, watching the flames spread, then returning to the scene in fancy dress, claiming to be the only man capable of dousing the flames. That could mean accepting a compromise offer from the EU and calling it victory (as he did in 2019) or marching into a trade war, accusing anyone who wants to be reasonable of advocating surrender (as he also did in 2019).

That much is predictable. The unknown element, as the economy sours and the cost of living rises, is how much public tolerance there will be for more Brexit battle reenactment games. In Brussels, there is none. All trust and patience are spent. That will not bother Johnson. He can see a route, via provocation, to a campaign of economic self-harm branded as patriotic self-defence. It is a reliable technique for as long as enough voters can be persuaded that their misfortunes are the fault of someone other than the prime minister; that he is the antidote and not the poison.

The persistence of that myth depends on the durability of the personality cult that treats Johnson’s optimistic style as the expression of a resilient national spirit. The technicalities and legal haggling are subordinate to that political engine of Brexit, which is not ideologically coherent, but deeply personal. It is a project that makes the leader’s interest synonymous with the wellbeing of the people. This rarely ends well, especially not when the leader’s methods for clinging to power are sure to make his country poorer.