The battle to get here was ugly, but the impact of Joe Biden’s climate plan will be huge | Jonathan Freedland 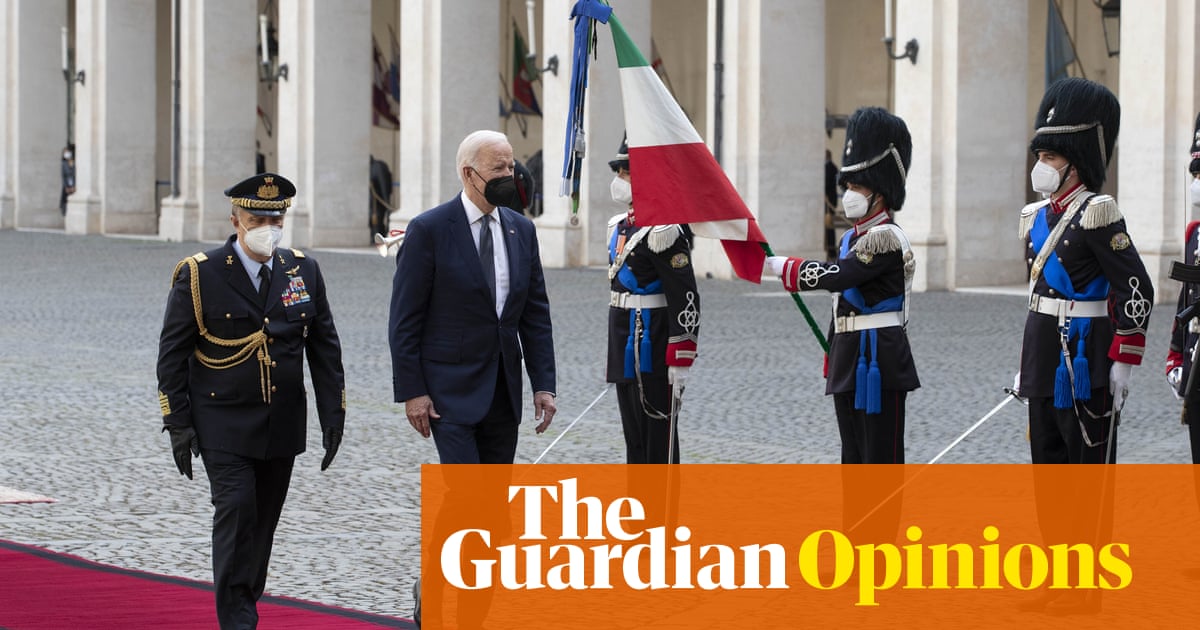 Move aside, Donald Trump: there’s a new American for the world’s progressives to hate. What’s more, he’s not even a Republican, but rather a member of Joe Biden’s Democratic party. He’s Joe Manchin, who represents West Virginia in the US Senate – the body that’s split 50-50, and which Democrats only control if every single senator stays onside. It’s thanks to him – aided and abetted by the Arizona’ Democrat senator Kyrsten Sinema – that Biden cannot take his place at the Cop26 summit in Glasgow proudly pointing to a raft of measures, signed and sealed, by which the US government will tackle the climate crisis.

Biden had a whole plan worked out, and most Democrats backed him. But Manchin refused to say yes. He insisted that Biden drop perhaps the most powerful element of his climate programme: rewards for energy companies that shift to renewable sources, and fines for those that stick with fossil fuels. Manchin killed that off, perhaps because he represents a state that still has some coal mining, perhaps because he has big personal investments in coal, perhaps because he has received fat donations from the fossil fuel industry. Or maybe just because West Virginia voted by an almost 40-point margin for Trump last year and so, to keep winning, Manchin has to look more like a Republican than a Democrat.

Either way, the effect is the same. Manchin has held up the passage of what Biden had envisaged as a transformative spending bill, a mega-package not limited to the climate emergency. To win Manchin over, the president has dropped all kinds of measures he had promised to deliver during his 2020 campaign and which the US desperately needs, many of them – from cheaper medicine for elderly people to paid family leave – hugely popular with US voters. Biden did all that so that he could get the overall price tag down from $3.5tn (£2.5tn) to $1.75tn, making it more palatable to Manchin – who believes in reining in, rather than unleashing, the might of government.

What’s left is $555bn for incentives and tax breaks aimed at reducing US carbon emissions, spread out over 10 years – far less than the US spends every year on defence.

Even that amount is not fully agreed. Though the White House hailed a breakthrough yesterday, Manchin and Sinema have not signed on the dotted line nor even committed to doing so. Which is why Biden left for Glasgow empty handed.

This matters not only because the US is, after China, the world’s biggest emitter of CO2, but because of the leadership role the US needs to play. It’s hard for Biden to bang the table and demand greater, speedier action from the likes of China and India when the US itself is still hesitating, even during this all too rare interlude – likely to end at next year’s midterms – when Biden’s party controls the White House and both houses of Congress. Authoritarian states fond of arguing that democracy is unfit for purpose in the 21st century will be cheered. Those young voters who rallied to Biden for the sake of the climate will wonder if it was worth it.

And yet, there is another way to look at all this. It begins with a recognition that the alternative to Manchin as the senator from West Virginia is not some impeccable liberal: if he or someone very much like him wasn’t there, the seat would be filled by a Republican and there would be no Biden plan, big or small. (The same is not true of Sinema: Arizona, which voted for Biden in 2020, would not punish her for behaving like a Democrat.) Not that this package is so small. If it passes, it will represent the biggest US spend to tackle global heating in history.

During the negotiations that led to this admittedly provisional agreement, Biden gave way on that string of popular, necessary domestic pledges, including free community college and expanded healthcare provision – but he held firm on the climate. It now stands as the largest single component of the entire bill, and that represents a huge victory by the environmental movement. It has persuaded one of the two main US parties to recognise that the climate is the dominant issue of the age.

Besides, $555bn is not to be sneezed at. I spoke on Thursday with Ben Rhodes, former adviser to Barack Obama. In 2009, Obama set aside a mere $90bn for climate-related action. But even that sum worked wonders. Despite Trump’s “ranting and raving”, and despite his withdrawal from the Paris accords, Rhodes notes that the US actually met its Paris targets in the Trump period.

That’s because Obama’s move had signalled where the economy was going, setting in train a shift that Trump could not reverse: “Companies were adjusting, the markets were adjusting, money was moving.” Now, a decade later, “people are not building new coal plants in the United States; they’re building windfarms and solar panels.”

Biden is sending a much bigger signal now. Combined with various executive actions he can take as president – moves he can make without the blessing of the senate or Manchin or anyone else – the legislation should help US greenhouse emissions fall to half their 2005 levels by 2030.

That can serve as a useful corrective to the view that the US, and democracy itself, has become dysfunctional and ineffective in the face of an existential threat. Yes, a dictatorship such as China can move more quickly: there is no senator from West Shanxi for Xi Jinping to worry about. But it is Europe and, if Biden’s deal holds, the US that is setting the pace. That, Rhodes adds, is partly down to the pressure to act on the climate that comes with an open civil society and a free press.

As for the motivation of a new generation, one that in 2020 got behind Biden with climate their most animating issue, what happens next is partly in the hands of all those who campaigned so hard to reach this moment. They can either lament all that was left out of the bill, railing against Manchin and Sinema, or they can celebrate what remained in.

It’s a partial victory, of course. Insufficient, inevitably. But the world’s most powerful country is about to take a big step forward. Its governing party decided that this was the one issue on which it could not compromise. At a time when so much is going in the wrong direction, we can allow ourselves a small cheer when something goes the other way.