The New Lynn mall terrorist claimed to know how to make a bomb and vowed to “kill someone with a knife” – possibly on Anzac Day or an event with a large crowd – if he was stopped from travelling overseas to join Isis, according to a former flatmate

The flatmate lived with Ahamed Aathil Mohamed Samsudeen in an Auckland apartment for several months in 2017, but moved out because he became afraid of Samsudeen’s fixation with Islamic State.

Samsudeen was shot dead by police on Friday after he stabbed a number of shoppers in the Countdown supermarket in New Lynn, Auckland, shortly after he was released from prison.

The 32-year-old had largely been in custody since May 2017 following his arrest at Auckland International Airport, as police believed he was attempting to travel to Syria to join Isis.

He was originally charged with possession of objectionable material in relation to violent Isis propaganda, and the police opposed his release on bail because of the potential risk to public safety.

His flatmate was interviewed by detectives from the National Security Investigations Group and his statement – obtained by the Herald – formed part of the evidence presented to the High Court to decide bail.

Samsudeen often questioned his flatmate about how to travel inside Syria – where Islamic State forces were fighting – and if he had any contacts who could help.

The previous year, in November 2016, Samsudeen travelled at short notice to Samoa and was vague in his answers when questioned by Customs on his return. The police believed the trip was a “practice run” by Samsudeen, who was testing to see whether he would be stopped from travelling.

“I asked him what happens if you’re not allowed to travel,” the flatmate told police, “and he said ‘I will do something here’.

“I asked him what he meant by that. He says ‘I will do something outside in the street, kill someone with a knife’. He says he will try to do as much damage as possible. As an example, he mentioned Anzac Day, or some time or place where there are a lot of people.”

The flatmate tried to reason with Samsudeen to say that innocent people would be hurt, even other Muslims who shared their faith.

Samsudeen allegedly replied: “All people living in New Zealand are kuffar”, an Arabic term for non-believers.

The flatmate told police that Samsudeen had a “big knife which he keeps under the mattress.

“After I saw the knife I was scared he might kill me, I slept with one eye open and spent most of my time out of the flat,” the flatmate told police.

“[Samsudeen] said he knew how to make a bomb, said it was very easy and he saw it on a video on the internet. He did not say what kind of bomb.”

The statement formed part of the police evidence to oppose bail on the objectionable material charges, according to three High Court decisions released this morning.

Samsudeen was denied bail on the first two occasions, but released on the third in August 2018 after he pleaded guilty to lesser charges of possession of restricted material.

The very next day after being released, August 7, 2018, he went to a store to buy a new hunting knife – which Samsudeen asked to be couriered to his address – and went home.

The police were forced to arrest him again. Another search of his apartment found a large amount of violent material, including an Islamic State video about how to kill “non-believers” in which a masked man cut a prisoner’s throat and wrists.

This time, prosecutors sought to charge Samsudeen under the Terrorism Suppression Act.

But a High Court judge ruled that preparing a terrorist attack was not in itself an offence under the legislation, which he said could be described as an “Achilles’ heel” hindering the authorities’ abilities to stop such would-be attackers.

Justice Mathew Downs acknowledged there was a serious threat to public safety from “lone wolf” attackers, especially after the Christchurch shootings that killed 51 people and injured 40.

But he dismissed the Crown’s application to charge Samsudeen under the anti-terror law, saying it was for Parliament, not the courts, to create an offence of planning an attack.

Justice Downs also ordered that a copy of his judgment be sent to the Attorney-General, Solicitor-General and Law Commission.

The judgment, first reported by the Herald in August, was cited by government officials as one of the key events leading to the introduction of new anti-terror powers in April.

The judge’s concerns were echoed by the Royal Commission of Inquiry into the Christchurch attacks when it presented its findings in November.

Labour’s new Counter-Terrorism Legislation Bill, which passed its first reading in May, would make it a criminal offence to plan or prepare for a terrorist attack.

On Saturday afternoon, Prime Minister Jacinda Ardern said work was under way to change the law by the end of the month.

Samsudeen was instead prosecuted on lesser charges and went to trial earlier this year.

On May 26, he was found guilty by a jury of possessing objectionable material, propaganda-style material supportive of Islamic State, and failing to comply with a police search. He was acquitted on other charges of possessing a graphic video depicting a prisoner being decapitated and possession of an offensive weapon.

This time the material was declared objectionable by the Chief Censor for promoting acts of extreme violence, cruelty and terrorism. It was only the second time the Office of Film and Literature Classification was asked to look at Isis-related material. 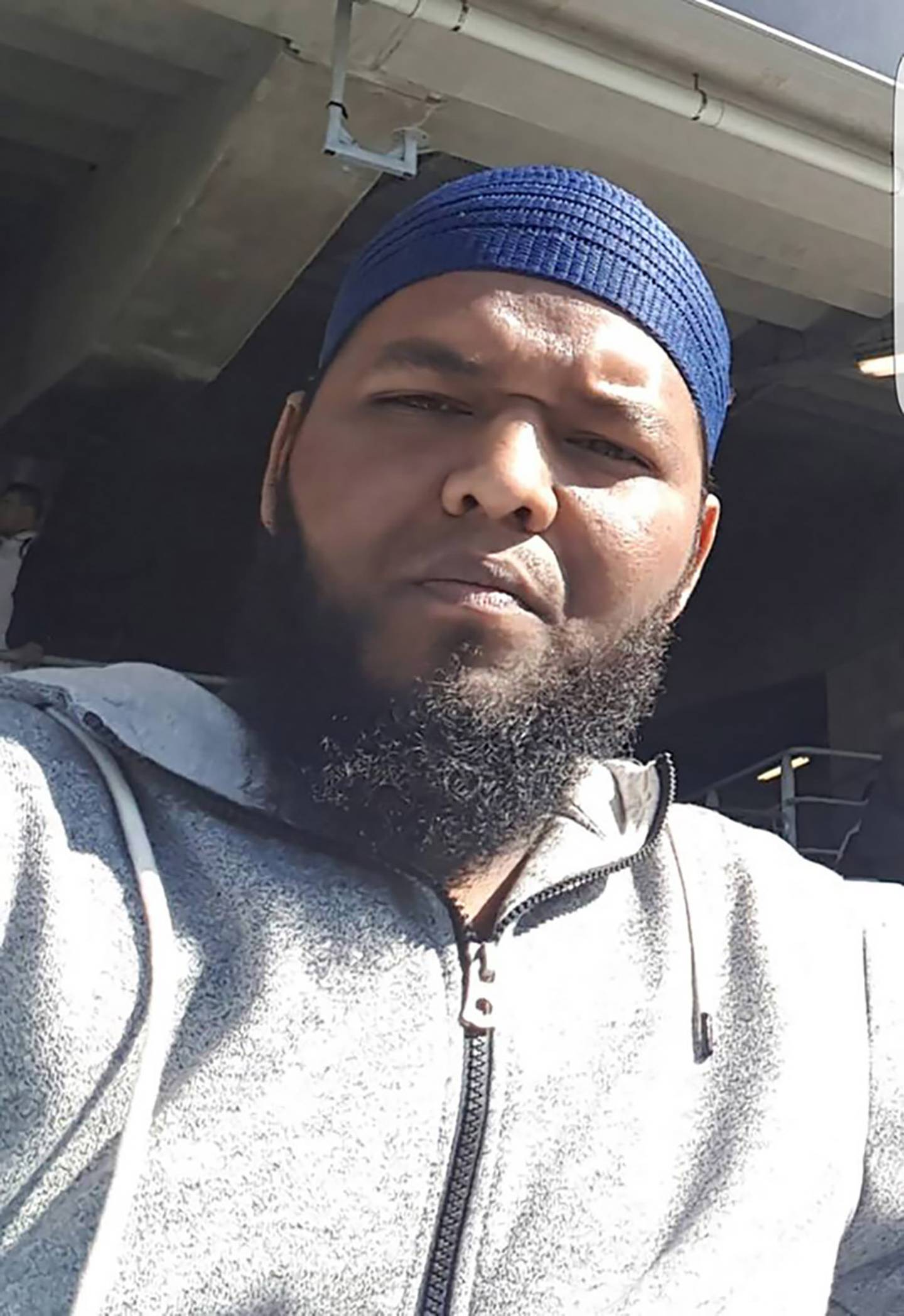 A photo of Aathill Mohamed Samsudeen from one of his since deleted Facebook pages, which police had monitored since 2016. Photo / Supplied

In his own words when giving evidence at his trial, Samsudeen claimed he was interested only in the centuries-old Islamic State established by the prophet Muhammad and learning about his religion.

“You’re worried about one knife, I am telling you I will buy 10 knives. It’s about my rights,” he said.

The objectionable material Samsudeen was convicted of this year were two nasheeds (hymns and chants) with images. One referenced martyrdom, featured a black-clad fighter with a machine gun, Isis flag, and lyrics advocating for jihad and decapitation.

The other, titled “We came to fill horror everywhere”, depicts men dressed in black with assault rifles, the Isis flag and a city on fire.

“We will drink from the blood of disbelievers,” the lyrics said.

In explanation for his offensive Islamic State material, Samsudeen compared the nasheeds to the haka.

“You guys have Māori war cries,” he said.

Samsudeen was combative throughout the trial and had frequent outbursts in the courtroom, some directed towards Justice Sally Fitzgerald, who sentenced him to 12 months’ supervision.

He said the Crown had wasted years of his life.

“I thank God, there have been prophets, other prophets who have been to prison,” he said.

“It’s just like a test … You guys put me in prison cause I’m a Muslim and you don’t like my religion, that makes you an enemy. Allah says you will be punished.”

According to a report prepared for his sentencing on July 6, Samsudeen had “the means and motivation to commit violence in the community”. Despite police concerns about the threat to public safety, he was sentenced to one year of supervision.

At that point in time, Samsudeen was still in prison on two active charges for assaulting Corrections staff members while waiting for the High Court trial.

However, once the High Court case ended, Samsudeen was released on bail on July 13 by an Auckland District Court judge after receiving and considering a joint memorandum from Crown and defence counsel.

This was because the amount of time he had already spent in prison, if bail was denied, would be longer than the maximum sentence even if he was convicted of the assaults, the Herald understands. Samsudeen’s bail was then varied on July 16 at the request of counsel.

The bail variation judgment noted Samsudeen had an “anti authoritarian stance towards police” and believed he had been set up to fail if police could directly monitor his internet activities rather than a probation officer.

Since his release from prison, Samsudeen had been under 24/7 surveillance by police including members of the elite Special Tactics Group.

The undercover officers managed to stop him within minutes of his attack, where he took a knife from a supermarket shelf and stabbed nearby shoppers. Seven were injured, and three are in hospital in a critical condition.

Ardern said the attack was carried out by an individual, not a faith, not a culture, not an ethnicity, but an individual person gripped by an ideology that is not supported here by anyone.

“This was a violent attack on innocent New Zealanders,” said Ardern. “It was senseless.”

Samsudeen first came to the attention of New Zealand police on March 23, 2016, after he posted images of graphic acts of war violence on his Facebook account, with comments supporting the Islamic State bombing attacks in Brussels the day before.

He was given a formal warning by police, but now aware of their interest, set up several different Facebook accounts under aliases.

Officers from the National Security Investigations group monitored his social media content, which included anti-Western and violent imagery as well as this comment on Facebook: “One day I will go back to my country and I will find kiwi scums in my country … and I will show them … what will happen when you mess with S while I’m in their country. If you’re tough in your country … we are tougher in our country scums #payback.”

After suppression orders preventing the publication of Samsudeen’s name and refugee claim were revoked on Saturday night, Prime Minister Jacinda Ardern revealed efforts were underway to deport Samsudeen but the long process was “frustrating”.