People hoping to be vaccinated gather outside the inoculation venue in a Manila mall. RICHARD REYES/FILE PHOTO

MANILA, Philippines—Thousands of Filipinos flocked vaccination sites in several parts of Metro Manila on Thursday (Aug. 5) in the middle of curfew hours.

In past months, similar scenes had been reported when Pfizer vaccines arrived. But this time around, the reason for desperation to get vaccines might no longer be about vaccine brands.

What drove those people to rush to vaccination sites at the break of dawn? Was it simply their desire to get vaccinated or was it fear or worry over word spreading that the unvaccinated would be sent home if found in the streets?

According to reports from the Manila Police District (MPD), around 19,000 individuals went and tried to get vaccines in different sites in the city.

Police also found out individuals from Cavite, Bulacan, Laguna, and Rizal who were among the crowd.

While Manila City offers walk-in vaccinations for the public—even for non-residents and non-workers in the capital city—it is still mandatory to register online.

Unfortunately, most of those who went to the vaccination centers said they had no idea about online registration requirement.

The herd also insisted on lining up and waiting at the sites despite being told about the cutoff for walk-in.

In some videos posted online by a netizen, people were seen lining up amid the curfew—some even disregarding health protocols like social distancing.

In an advisory, the city of Las Pinas said it would no longer allow queues in vaccination sites during curfew hours or between 8 p.m. to 4 a.m.

In a separate statement, the city government said that the vaccination will resume during enhanced community quarantine from Aug. 6 to 20.

However, only those who registered online and have secured their patient ID number and QR code will be accommodated.

The city government said only senior citizens are allowed to line up for vaccines without the QR code.

It said those wanting to get inoculated should register at bit.ly/LasPiñasVaccination,

So what was the reason for the sudden surge in vaccination sites?

One reason, according to a government official, was the apparent “no vaccine, no ayuda (aid)” rumors circulating on social media.

“To set the record straight, the distribution of ayuda and benefits or privileges is not anchored on whether an individual has been inoculated or not,” he said.

The people who assembled at the vaccination centers also said they felt it urgent to get vaccines following reports that the unvaccinated would not be allowed outside their homes during the ECQ.

Last week, the Department of Health (DOH) already clarified that vaccination status is not the qualification for being outdoors during the lockdown in Metro Manila.

“There will be no distinction between vaccinated and unvaccinated individuals,” said DOH spokesperson Ma. Rosario Vergeire.

“No differentiation between vaccinated and unvaccinated,” she said. Only persons authorized outside their homes, based on definitions by the government, would be allowed to go out, she said.

READ: Who can go out? DOH says ‘no distinction’ between vaccinated, unvaccinated

A backlash from Lapu-Lapu residents prompted the city government to revoke the controversial order, according to Malacañang on Tuesday (Aug. 3).

The Palace has already issued a statement, clarifying that it is not yet time to impose a “no vaccine, no entry policy” in establishments since there are still a lot of people who have yet to receive their doses.

READ: Palace: Not yet time to impose ‘no vaccine, no entry’ policy in establishments

Despite the Palace’s stance on the issue, President Rodrigo Duterte himself, however, had said he wants police and village captains to escort unvaccinated persons back to their residences.

“Those who do not want to get vaccinated, I am telling you, do not go out of your houses. If you go out, I will tell the police to escort you back. You will be escorted back to your house because you are a walking spreader,” Duterte said partly in Filipino last July 29.

“If they refuse to get vaccinated, barangay captains should not allow them to leave their house,” the President added.

This was not the first time Duterte said such pronouncements.

In May, amid continuous vaccine hesitancy among Filipinos, the President advised persons who refuse to get vaccines to just stay at home.

“We cannot force you but if you don’t want to be vaccinated, don’t go out of your houses so that you will not infect other people,” Duterte said.

The following month, Duterte again threatened those who refuse to get vaccinated. This time, the president said those who hesitate to get their vaccine shots may be arrested.

“They are hard-headed. Don’t get me wrong. There is a crisis being faced in this country. There is a national emergency. If you don’t want to get vaccinated, I will have you arrested. And I will inject the vaccine in your butt. [CURSES]. You are pests. We are already suffering and you’re adding to the burden,” Duterte said, speaking partly in Filipino.

READ: Those who refuse to get vaccinated vs COVID-19 may be arrested, Duterte warns

Justice Secretary Menardo Guevarra clarified that is no law to compel anyone to get vaccinated.

“I believe the President merely used strong words to drive home the need for us to get vaccinated and reach herd immunity as soon as possible,” Guevarra said.

“As a lawyer, he knows that not getting vaccinated is a legal choice. There is no law as yet that compels vaccination against COVID-19, much less criminalizes it, as presently available vaccines are still in their trial phases,” he added.

READ: No law against refusing to get vaccinated, says Guevarra

As usual, Duterte’s Cabinet came to the rescue, explaining the intentions behind Duterte’s statement.

“As far as arresting those who won’t get vaccinated, we have no such policy,” Cabinet Secretary Karlo Nograles said, speaking partly in Filipino.

“When the President said that, I think he already explained that he said it in the context of, as it were, a sense of exasperation.” 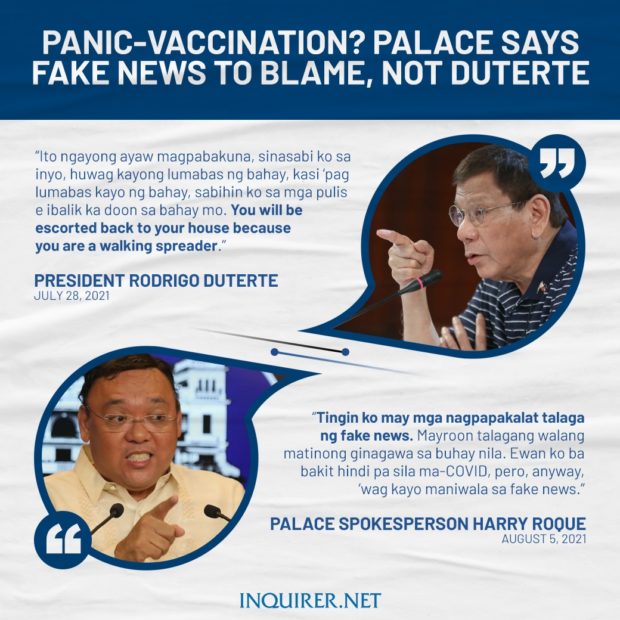 Still, presidential spokesperson Harry Roque on Thursday quashed speculations that it was Duterte’s past pronouncement that led to the overcrowding in Manila and Las Pinas vaccine sites.

“I don’t think so. I think some no-good people are spreading fake news,” he said.

“I don’t know why they haven’t got COVID-19 yet but anyway don’t believe in fake news,” he added.

What the numbers say
A recent Social Weather Stations (SWS) survey released last month said around 45 percent of Filipinos are now willing to get vaccinated against SARS Cov2, the virus that causes COVID-19. 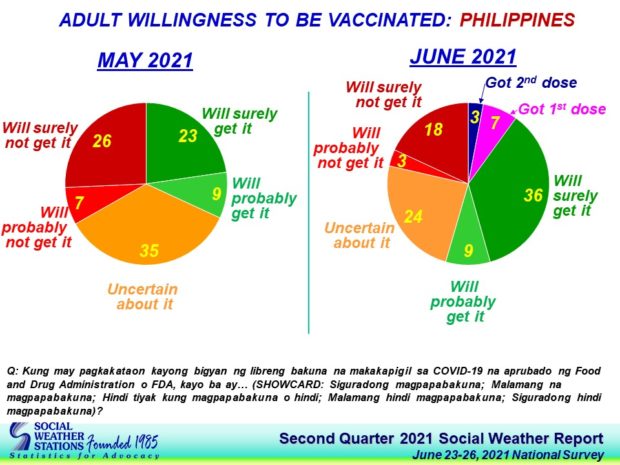 This is higher than the numbers released by SWS in May, which showed only 32 percent of Filipinos were willing to be inoculated.

The percentage of respondents who were uncertain also dropped, from 35 percent in May to 24 percent by June. 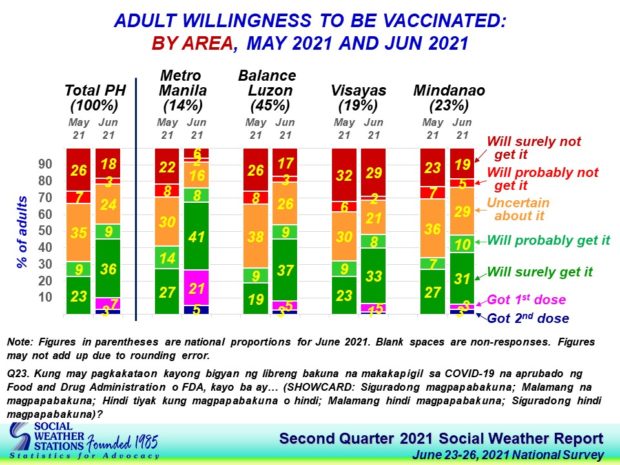 Data presented by Health Undersecretary Myrna Cabotaje on Tuesday (Aug. 3) showed that a total of 11,840,504 individuals from A1 to A5 categories have already received their first dose.

The number of those who have already completed their required full doses has reached 9,369,625.

Meanwhile, the number of COVID-19 infections in the country continues to rise.

Metro Manila under ECQ from August 6 to 20


For more news about the novel coronavirus click here.

What you need to know about Coronavirus.

The Inquirer Foundation supports our healthcare frontliners and is still accepting cash donations to be deposited at Banco de Oro (BDO) current account #007960018860 or donate through PayMaya using this link .

You’re so vain — you’re probably betting on a recession

Mark Cuban Says This Could Cause the Next Crypto Implosion