Here are all the latest updates:

At least three killed in blasts in Russia’s Belgorod: Official

At least three people have been killed and dozens of residential buildings were damaged in the Russian city of Belgorod, according to the local governor.

Al Jazeera could not verify the claims independently.

US funds software for Russians to slip past censors

A US-backed campaign is giving Russians access to anti-censor software to dodge Moscow’s crackdown on dissent against its invasion of Ukraine, reports the AFP news agency.

Groups involved in the campaign told AFP that the US government-backed Open Technology Fund is paying out money to a handful of American firms providing virtual private networks (VPNs) free of charge to millions of Russians, who can then use them to visit websites blocked by censors.

Traditional VPN software creates what is effectively a private tunnel on the internet for data, typically encrypted, to flow safeguarded from snooping – and their use has boomed in Russia since the invasion.

“Our tool is primarily used by people trying to access independent media, so that funding by the OTF has been absolutely critical,” said a spokesman for Lantern, one of the involved companies.

Tech firms Psiphon and nthLink have also been providing sophisticated anti-censorship applications to people in Russia, with OTF estimating that some four million users in Russia have received VPNs from the firms.

Psiphon saw a massive surge in Russian users, with the number soaring from about 48,000 a day prior to the February 24 invasion to more than a million a day by mid-March, said a company senior advisor Dirk Rodenburg.

Explosions reported in the Russian city of Belgorod

A Russian official says blasts in the city of Belgorod, near the border with Ukraine, resulted in a fire in a residential building.

Vyacheslav Gladkov, the governor of Belgorod, said three wounded people were taken to a hospital.

“Reasons for the incident are being investigated,” he said on the Telegram messaging app. “Presumably, the air defence system worked.”

An adviser to Zelenskyy has conceded that the city of Lysychansk, Ukraine’s last big bastion in the eastern province of Luhansk, could fall to the Russians.

“This is indeed a threat. We shall see. I do not rule out any one of a number of outcomes here. Things will become much more clear within a day or two,” said Oleksiy Arestovych.

“If Lysychansk is taken, strategically it becomes more difficult for the Russians to continue their offensive. The front lines will be flatter and there will be a frontal attack rather than from the flanks.”

He said the Russians would have to focus on taking six major cities in the industrialised eastern Donbas region and with each their forces would be more and more thinly spread.

“The more Western weapons come to the front, the more the picture changes in favour of Ukraine,” he said. 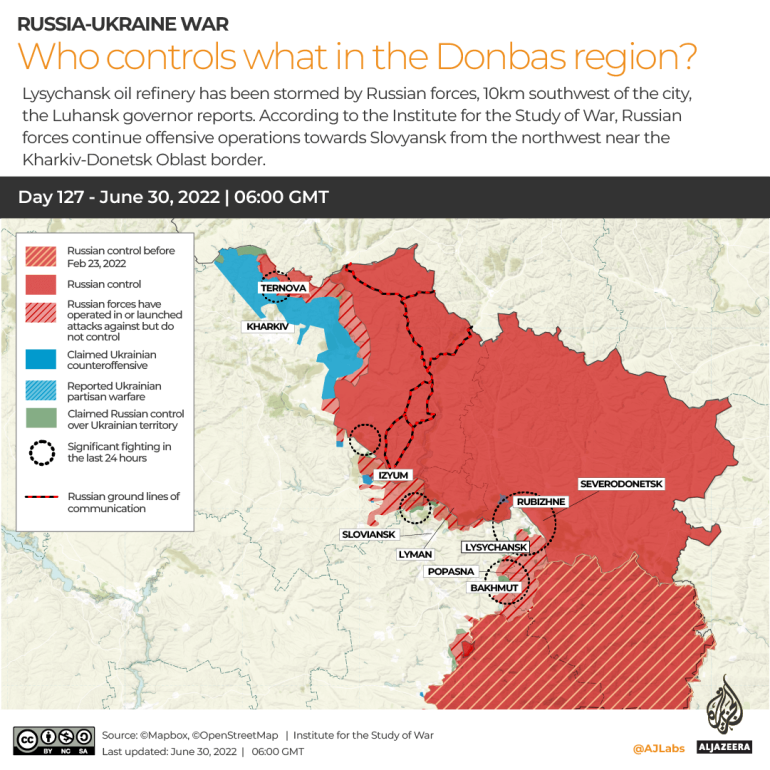 Ukrainian President Volodymyr Zelenskyy has called for international aid to help rebuild his devastated country once the war is over, sounding a rare hopeful note after four months of brutal conflict.

“It is necessary not only to repair everything the occupiers have destroyed, but also to create a new foundation for our lives: safe, modern, comfortable, accessible,” he said in his night time address.

This would require “colossal investments, billions, new technologies, best practices, new institutions and, of course, reforms,” he said. “No matter how difficult it is for us today, we must remember that there will be a tomorrow.”

On Monday, a meeting of some 40 potential donor countries is due to take place in Lugano, Switzerland, where the Ukrainian government intends to present its priorities for the reconstruction of the war-ravaged country for the first time.

Zelensky also used his video address to remind Ukrainians that the war was far from over. “Its cruelty is increasing in some places, and it cannot be forgotten,” he said, appealing to his compatriots to offer assistance to victims of the brutal conflict.

Fearing Russia might cut off natural gas supplies, the head of Germany’s regulatory agency for energy has called on residents to save energy and to prepare for winter, when use increases.

Federal Network Agency President Klaus Mueller urged house and apartment owners to have their gas boilers and radiators checked and adjusted to maximize their efficiency.

“Maintenance can reduce gas consumption by 10 percent to 15 percent,” he told Funke Mediengruppe, a German newspaper and magazine publisher.

Mueller said residents and property owners need to use the 12 weeks before cold weather sets in to get ready. He said families should start talking now about “whether every room needs to be set at its usual temperature in the winter – or whether some rooms can be a little colder.”

The appeal came after Russia reduced gas flows to Germany, Italy, Austria, the Czech Republic and Slovakia earlier this month, blaming a technical problem for the reduction in natural gas flowing through Nord Stream 1, a pipeline which runs under the Baltic Sea from Russia to Germany.

The company said equipment getting refurbished in Canada was stuck there because of Western sanctions over Russia’s war in Ukraine.

German leaders have rejected that explanation and called the reductions a political move in reaction to the European Union’s sanctions against Russia after its attack on Ukraine.

Belarusian President Alexander Lukashenko says his army had shot down missiles fired into their territory from Ukraine and vowed to respond “instantly” to any enemy strike.

“We are being provoked,” Lukashenko was quoted as saying by state news agency Belta.

“I must tell you that around three days ago, maybe more, they tried to strike military targets in Belarus from Ukraine,” he said. “Thank God, our Pantsir anti-air systems intercepted all the missiles fired by the Ukrainian forces.”

Ukraine last week said missiles fired from Belarus had struck a border region inside its territory.

Lukashenko denied his country was seeking to intervene in the conflict between Russia and Ukraine, but issued a warning aimed at Kyiv and its Western allies.

“As I said more than a year ago, we do not intend to fight in Ukraine,” he said. “We will only fight in one case. If you… enter our land, if you kill our people, then we will respond,” he added, warning that Belarus would reply “instantly” to an enemy strike on its soil.

Hello and welcome to Al Jazeera’s continuing coverage of the Russian invasion of Ukraine.

Read all the updates from yesterday, July 2, here.