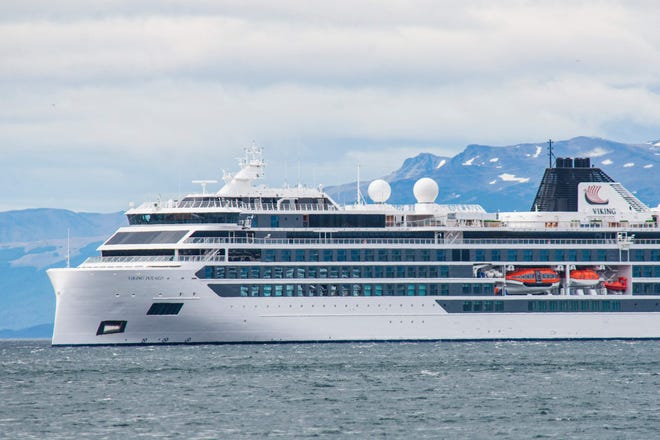 One person died and four others were injured after a giant “rouge wave” hit an Antarctica-bound cruise ship, travel company Viking confirmed to multiple outlets.

The “rogue wave incident” occurred during a storm earlier this week – when the Viking Polaris cruise ship was heading towards Ushuaia, Argentina, a starting point for many trips to Antarctica, a Viking representative told AFP.

“It is with great sadness that we confirmed a guest passed away following the incident. We have notified the guest’s family and shared our deepest sympathies,” the company’s statement to AFP read, adding that four other passengers were treated for non-life-threatening injuries onboard.

The Viking Polaris also had some minor damage, AFP reported, noting that several windows were smashed. The ship was anchored off of Ushuaia following the incident.

Cruise lines dropped COVID protocols:How did that impact cases on ships? We have the numbers.

“We wondered if we hit an iceberg. And there are no icebergs out here, but that’s how it felt,” Suzie Gooding, a passenger on the Viking Polaris, told WRAL News. “Everything was fine until the rogue wave hit, and it was just sudden. Shocking.”

Viking told the outlet that the company’s “focus remains on the safety and wellbeing of our guests and crew” and that they were working to arrange return travel for those impacted by the trip.

According to Viking’s website, the Viking Polaris is a 665-foot-long cruise ship that was built in 2022. Its capacity allows for 378 guests and 256 crew members.

According to the National Oceanic and Atmospheric Adminstration, a rouge wave is a large and unexpected wave that can be very dangerous.

Rouge waves, which scientists call “extreme storm waves,” are more than twice the size of surrounding waves, the NOAA says, and often come from different directions than that of the already-existing waves and wind.

What’s everyone talking about? Sign up for our trending newsletter to get the latest news of the day

These waves are very unpredictable and have an intimating appearance – with most reports describing rouge waves to look like steep “walls of water,” the NOAA says.

The agency adds that rouge waves are “extremely rare.” Experts are still researching how these waves form, but the NOAA notes that there are several known causes – including “constructive interference” relating to swells in the ocean and focuses on shifts in “wave energy.”

UPSC: How Indians crack one of the world’s toughest exams

Russia Had Plans for Ukraine’s Nuclear Power Plants Before Invasion