Pokémon Legends: Arceus Raises The Question – How Much Do Janky Graphics Matter?

I have a secret to admit. I am… a little bit bored of Pokémon. If I’m completely honest with myself, I have been for a while.

I’ve played almost every mainline game, but I started losing momentum around the time of Sun and Moon. It just seemed so overwrought and complicated, with the introduction of regional forms, Ultra Beasts, and Z-Moves, plus X & Y‘s addition of Mega Evolutions, layered on top of the same old plot (team of grunts led by charismatic megalomaniac try to do a big evil thing, two legendary Pokémon are involved, etc.).

Then Sword and Shield came along and added even more stuff, like Dynamaxing and Gigantamaxing and their unique moves. Sometimes there can be a reassuring appeal to nostalgia by repeating the same patterns, but sometimes it’s just boring, confusing, and unnecessarily convoluted. You might totally disagree with me, of course, and that’s okay! I look forward to healthy and respectful debates in the comments! But this is my soapbox and you can only talk when I’m done, so shh for now.

Thank Arceus that the new Pokémon Legends returns to simpler stuff, by stripping back a lot of the new stuff from the mainline games and starting fresh. But there is one complaint echoing around the tubes of the internet: It doesn’t look good.

In fact, that’s the reason I wasn’t going to buy it. The trailers looked universally duff to me, with low frame rates, blurry, repeating textures, and weird, harsh lighting over everything. Oh, and the trees looked bad. I know that’s a big deal for some people.

Usually I don’t care about “bad graphics” too much if the game looks interesting, but it felt pretty telling that the trailers didn’t really show us much about the game itself. Having been in games for a few years, I know what that usually means: The game is bad, and they’re trying to hide it to ensure that people don’t cancel their pre-orders. They must be rushing it out, I thought, my opinion bolstered by the fact that the graphics really hadn’t improved that much from that first disappointing trailer.

And then I read our review. It was glowing. But, like many of you, I’m often wary of reviews, especially the blockbuster game reviews written by long-time fans. It pays to be a little cynical, and to examine the provenance of a review, so I chatted to the reviewer, Jordan — who assured me that it was, in fact, as good as all that.

Well, I had one of those Nintendo Switch eShop vouchers to use, so… what was the harm? Plus, we were anticipating having to write a lot about this massive new Pokémon release, so it made sense to play it. So, I pre-ordered the game (gotta get that Growlithe kimono pre-order bonus, innit). And then, following all the chaos in the wake of the review embargo lifting, I downloaded it at midnight.

I’ll get this out of the way: I’m genuinely pretty surprised by how janky Pokémon Legends: Arceus’ graphics are, considering the piles of money upon which Game Freak have built their studio. I know how game dev works, and I’m sure there’s a good reason, but still.

The abysmal draw distance makes the world seem empty, and Pokémon, plants, and people pop in just metres away from my character. In battles, the grass jumps around for some reason, and in cutscenes, the sky stutters. The lighting on trees and characters are oddly harsh, casting dark, sharp shadows over everything to make the world look like it’s under an unflattering Instagram filter.

It doesn’t seem rushed, exactly; it seems pared-down, as if some higher-ups only let the Game Freak artists and designers have a certain amount of free rein. The buildings are sparse and empty, as if everyone only just moved in, and the world itself is relatively simple, too — so I find myself wondering if this was a proof-of-concept with severe limitations on how much time could be spent making it. 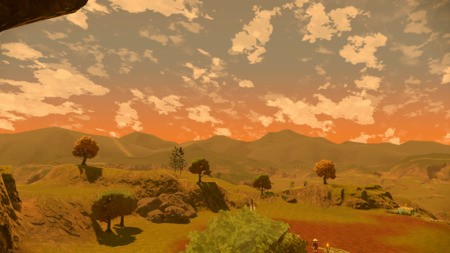 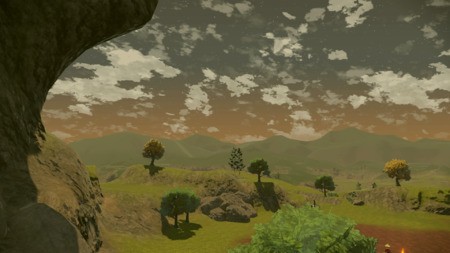 As Jordan’s review says, the game is not without its beauty, and I do love the expressiveness of the characters and the allure of the unspoiled wilderness. There are even moments when it looks a bit like an old Japanese painting — which is presumably what they were going for — but I can’t help feeling that I wish they’d leaned even more into something stylised — not all the way into Okami territory, but somewhere in between that, and this. The UI elements are a great example — they’ve used large brush strokes and interesting shapes and colours to create something dynamic and fun to look at, with a sense of age to it; it’s a shame the world doesn’t quite live up to that.

But! As I said before… janky graphics are just not all that important to my enjoyment of a game. Some of my favourite games, in fact, look like arse. I have a whole spiel about how much the art of Slay The Spire bothers me, but it doesn’t affect the fact that I think it’s fantastic.

Obviously, the ideal outcome is to have a game like Hades: Visually stunning, narratively engrossing, and perfectly balanced: All aspects of the game polished to create a cohesive, appealing whole. But sometimes, a game idea is strong enough to break through the initial disappointment of a janky-looking game, and so far — I’m not that far in yet — Pokémon Legends: Arceus has managed to hold its own.

It’s trying something new, and that’s what matters to me. It’s a fascinating revitalisation of a somewhat stagnant series, which invites players to experience a familiar, nostalgic game from a new perspective. I would personally rather have five ugly-but-intriguing games than one gorgeous-but-boring game.

Let me anticipate what you’re thinking: I’m no Pokémon mega-fan. I have a lot of Pikachu plushies, sure, and I’ve played almost all of the mainline games, but I think the formula is pretty stale now. I probably wouldn’t have even played Sword and Shield if it wasn’t set in (fake) Britain, because I really wanted to see my homeland represented in Pokémon form. I love the weird little creatures, but I don’t care too much about collecting and battling them, and I certainly don’t look forward to having to mash through a billion textboxes of information in every. single. battle.

I promise I’m not just jumping on the “Pokémon Legends is the best game ever!!!!” bandwagon. I am genuinely disappointed in the graphics, because I know Game Freak is capable of better (they made Pocket Card Jockey! Which is definitely an example of excellent graphics). But… if this is what it takes to take Pokémon in a direction that actually interests me again, I’ll take it.