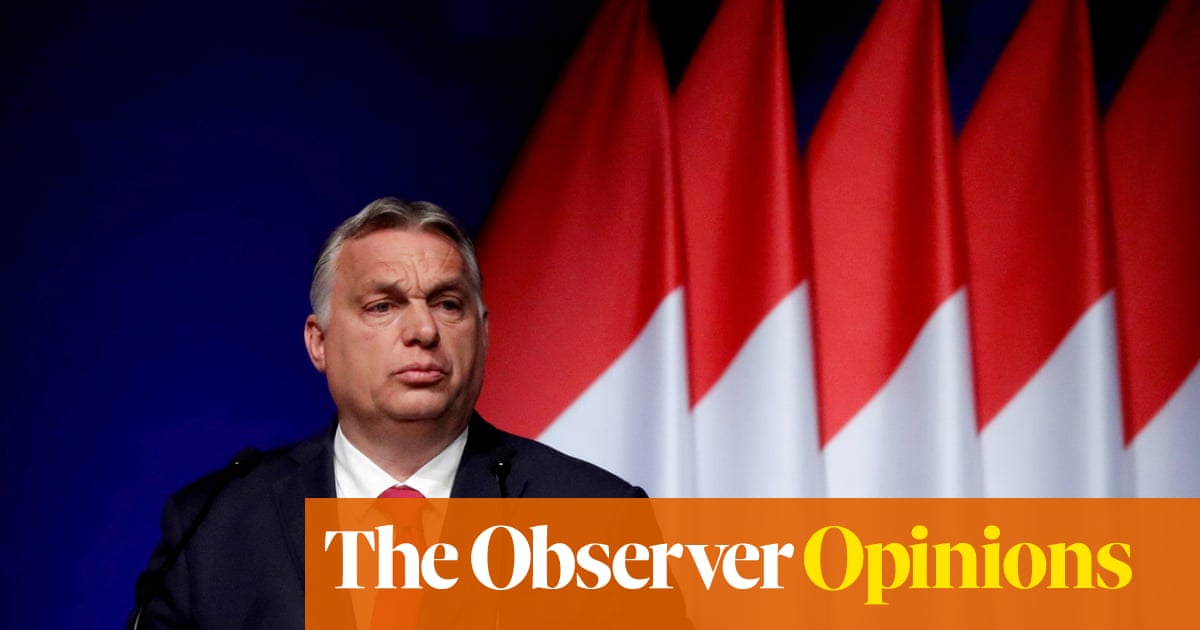 Gergely Karácsony does not have the commanding features of a warrior who can fight Europe’s authoritarian nationalists. The mayor of Budapest is 46, but his mild manner makes him look like an unassuming junior lecturer who could not take on a class of rowdy students, let alone Viktor Orbán, Hungary’s de facto dictator.

He doesn’t shout or sloganise. He talks in a learned manner about how the European Union has fallen for a Fukuyaman delusion that democracy is irreversible while all the time providing cover for the dismantling of democracy in Poland and Hungary.

Yet Karácsony has a fair chance of being the sole opposition candidate in next year’s Hungarian elections precisely because he is not a populist. In desperation at the threat to the rule of law Orbán poses, six Hungarian parties have revived the classic anti-fascist tactic of a popular front. Politicians, from the formerly far-right Jobbik party all the way through to the radical-left Greens, have put aside their ideologies for the greater good of smashing a rigged system. After a decade of fruitless infighting, they have learnt that, when democracy is in danger, divisions between left and right, social conservatives and woke progressives are irrelevant.

To win, they must build a consensus and appeal to the widest possible spectrum of support. They cannot beat populists by being populist. They cannot afford to treat large numbers of their fellow citizens as enemies. They must focus their energies on isolating and overthrowing the elite who run the ruling Fidesz party and everything else that matters in Hungary. The high stakes are not immediately obvious. To the casual visitor, Budapest appears unchanged. The baroque and art nouveau architecture is as gorgeous as ever. The supermarket shelves are full in eastern Europe, to the wide-eyed wonderment of British visitors from behind the Brexit curtain.

I found Zsuzsanna Szelényi can help foreigners understand how deep the rot has penetrated. She became one of Fidesz’s first MPs in 1990. Orbán posed as a liberal back then because liberalism seemed the way of the future. She broke with him because his innate authoritarianism became too hard to ignore and now sees her former ally as “Europe’s most unscrupulous autocratic political chief”.

Better than Vladimir Putin, Orbán understood that the tactics of the troll and the thug could be used to mould whole nations. As soon as Fidesz won power in 2010, it began rigging the system. It redrew parliamentary boundaries and added a novel concept of “winner compensation” that awarded the victorious party with extra votes. Fractured and often discredited opposition parties helped. But political fixing gives Orbán a two-thirds majority of parliamentary seats, which allows him to rewrite the constitution at will, without a majority of the votes cast.

State capture has followed. Bureaucrats and police and military officers know their position depends on not crossing the ruling party. Power in Hungary is not based on fear of arrest and torture but on the gentler but no less effective fear that if you speak out you will lose your job.

Meanwhile, and I accept this is a bold claim for a British journalist to make, the Hungarian media are the most prostituted in Europe. The state controls its broadcasting services directly. Elsewhere, it relies on a network of Orbán-supporting oligarchs, who put 500 media outlets under the editorial control of a state foundation. The simple but effective tactic of rewarding servile journalism with taxpayer-funded advertising revenue mops up most of the rest. No stratagem is too debased to follow. Orbán has been the leading promoter of the conspiracy theory that the Jewish financier George Soros is using his wealth to destroy the white, Christian west by flooding it with migrants. Across the world, a belief in his “Soros plot” is as reliable an indicator of far-right affiliation in the 21st century as a swastika badge on the lapel and a copy of the Protocols of the Elders of Zion on the bookcase were in the 20th.

Taxes and EU funds are routinely stolen. The only benefit of Brexit I can see is that our money is no longer ending up in the pockets of Fidesz’s thieves. For it is a bitter truth for those who support the EU that until last year Europe’s Christian democrats in general, and the over-praised Angela Merkel in particular, were the protectors of anti-democratic movements in Hungary. Merkel’s long overdue retirement and a defeat for her party in the German elections will do wonders for European freedom.

I am writing from the Budapest forum, a conference of progressive European mayors at the Central European University. There’s no better place to contemplate the apparent futility of fighting the autocratic state. Its academics and students are nowhere to be seen because Orbán drove them into exile in Vienna rather than permit the existence of a centre for independent thought.

To their credit, the Hungarian opposition has not given up. Starting next month, opposition parties will hold primaries in every constituency to decide who should be the sole unity candidate at the April 2022 general election. Karácsony may not win the separate primary to be the stand-alone opposition candidate for prime minister – leaders of other parties have an equal claim – but whoever wins must imitate his reassuring manner that tells wavering Hungarians that it is safe to risk a change of government.

And what of us? The UK is not heading towards dictatorship. The police do not hound opposition politicians as they do in Hungary. The full resources of the troll state’s media are not used to smear them. But look at this government’s attempts to nobble the Electoral Commission, put a rightwing radical in charge of broadcasting regulation and rig the system to the Conservative party’s advantage. Unlike in Hungary, Labour and Scottish National party obduracy has scuppered the idea of electoral pacts that would ensure parties stood aside to allow the candidate with the best chance of beating the Conservative to have a clear run. Nothing can shift their parochial sectarianism.

Fidesz came to power in 2010, the same year the Conservatives took power in the UK. Perhaps because the threat to freedom is greater, Hungarians are prepared to do whatever it takes to stop a one-party state. Meanwhile, their British counterparts are willing to see it stretch on for years without end.