TERROR ATTACK LATEST
* Man was being followed by police, grabbed knife in store before stabbing shoppers
* Isis sympathiser had been arrested for allegedly planning ‘lone wolf’ knife attack
* Chilling video captures moment of terror in Auckland mall
* ‘He’s got a knife’ – brave bystander helps wounded woman
* Isis supporter who allegedly planned Auckland attack could not be charged as a terrorist

It was the one mundane location Aucklanders were allowed to venture to from their homes during a sunny lockdown afternoon and it turned into a nightmare.

Three people are now fighting for life in hospital after that supermarket run. The 32-year-old attacker is dead.

For 60 horrific seconds, Countdown supermarket in New Lynn yesterday turned into the site of an Isis-inspired terrorist attack.

A man under 24-hour police surveillance entered the supermarket about 2.30pm and grabbed a knife from the shelves before running through the aisles shouting.

A local man witnessed the very first moments of the attack which left him shaken.

“It literally happened in front of me. I was just buying stuff and walking toward the milk aisle, and then suddenly I heard a person shouting loudly ‘Allahu Akbar’ and just running,” the 34-year-old witness said.

“So there was this lady in front of me and he jumped on her so she fell, so that person [the attacker] also sort of lost his balance. He also fell. Then he got up. But I was behind so I couldn’t see his face but this person was wearing like a khaki jacket and he had a knife, a pretty big knife — like I would say the size of his arm.

“It was very scary. It was like a mini sword, not like a full sword. It was like a sword literally. She was lying on the floor. I have a feeling she may have got stabbed.”

He described the “slightly hefty” attacker as about 172cm tall.

Another shopper, Amit Nand, told TV current affairs show The Project he confronted the terrorist in the supermarket after hearing screams.

“I saw a lady laying on the floor there bleeding and she was like, ‘help, help’,” Nand said.

“And I [thought] to myself ‘I’ve got to do something’, you know, and then I saw the guy with the knife.”

Police and the ambulance at the New Lynn Countdown after a terrorist attack in which six people were stabbed. Photo / Alex Burton

“He had a big knife on him and he was just saying ‘Allahu, Allahu’ and he had already stabbed two other people.”

Within 60 seconds of the attack beginning, the police strategic tactical team in plain clothes who were following the attacker closely enough to hear the first shouts of alarm had drawn their weapons and were directing shoppers to leave.

“I had another guy come in front of me and he was a cop and was like, ‘I’m an undercover cop, step back step back, I’m going to shoot him’,” Nand said.

“I stepped a metre back and then all I heard was like five shots … and he was on the floor.

“Looking at him I knew he wanted to kill people.”

S came to the attention of New Zealand police in 2016 after he posted “staunchly anti-Western and violent” material on his social media accounts. Photo / Supplied

By the end of the attacker’s knife rampage, six innocent shoppers had been stabbed.

Workers in a nearby pharmacy had barricaded themselves inside, and shoppers covered in blood were being evacuated.

“This was someone who was known to our national security agencies,” Prime Minister Jacinda Ardern said in Parliament last night.

“There are very few who fall into this category and I can give you this assurance.”

She said the attacker was ISIS-inspired.

Ardern also confirmed, “yes, I was personally aware of him,” adding she was devastated by the news of the terror attack.

“I’ve known about this individual for some time. By law we could not keep him in prison, so he was being monitored constantly,” Ardern said.

“Yes [my heart sank] because I knew we had been doing everything we could, everything that we could. So yes, I was absolutely gutted.” 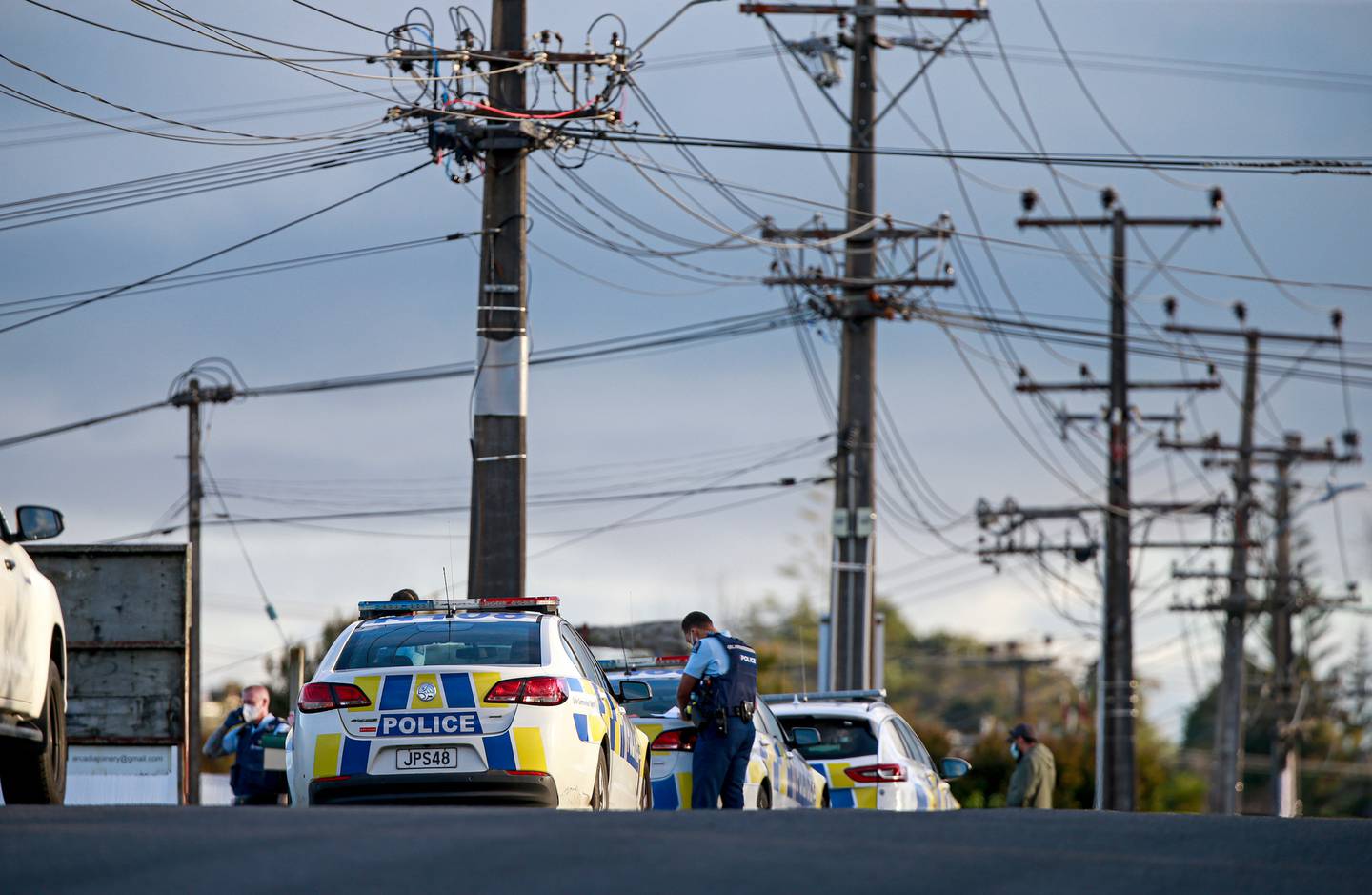 Police at the Glen Eden mosque on Waikaukau Rd after the stabbing of six people in a terrorist attack at the New Lynn Countdown. Photo / Alex Burton

Police Commissioner Andrew Coster, speaking alongside Ardern, said the man was “closely watched by surveillance teams and a strategic tactical team” as he travelled from his home in Glen Eden to Countdown in New Lynn yesterday afternoon.

“I know this operation raises questions about whether the police could have done more,” Coster said.

“The reality is when you are surveilling someone on a 24-hour basis it is not possible to be immediately next to them.” 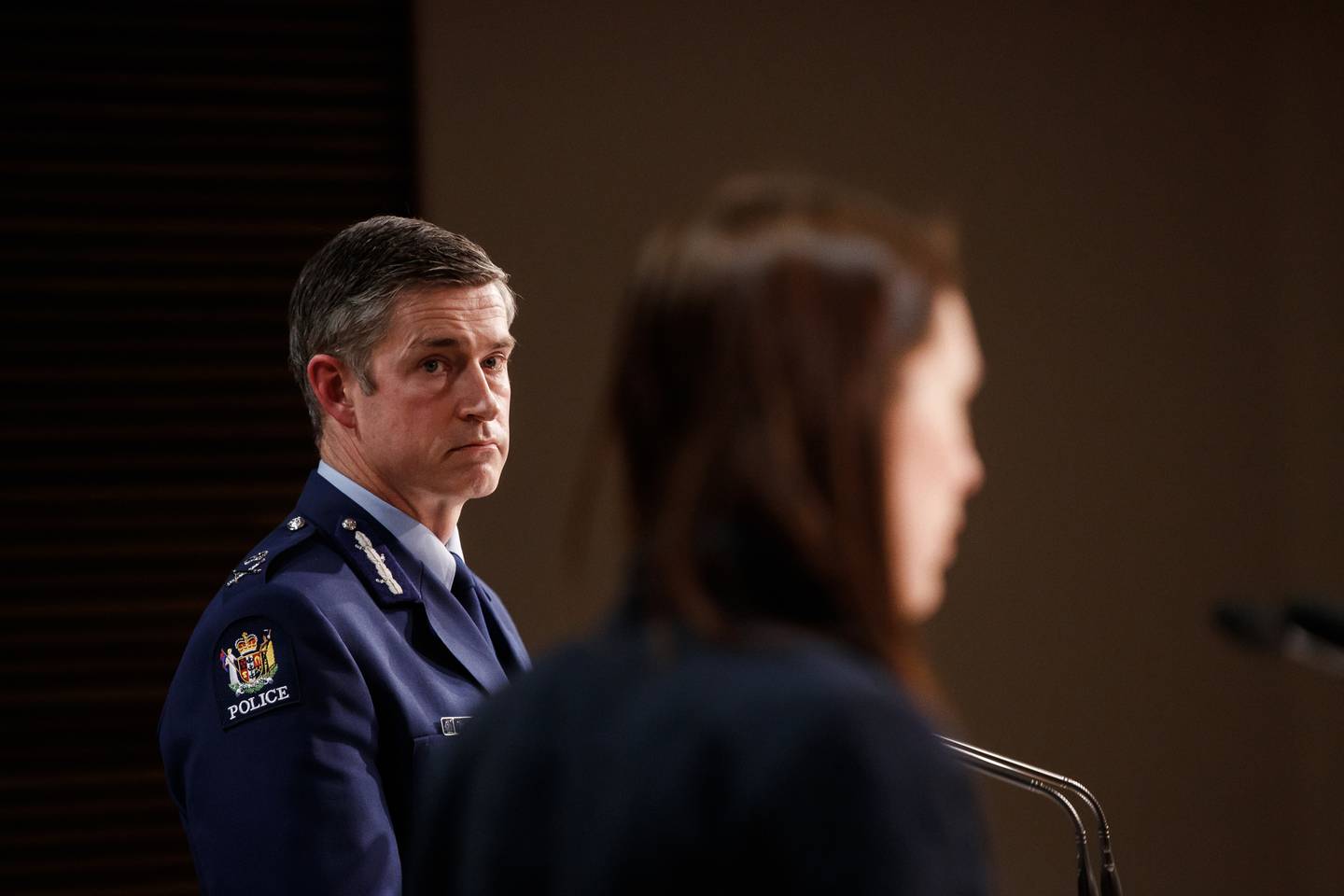 Coster said there was nothing to indicate before the attack that the man had travelled to New Lynn Countdown for anything other than a “routine shop”.

The terrorist attacker – known only as “S” for legal reasons – had been previously arrested for allegedly planning a “lone-wolf” knife attack. 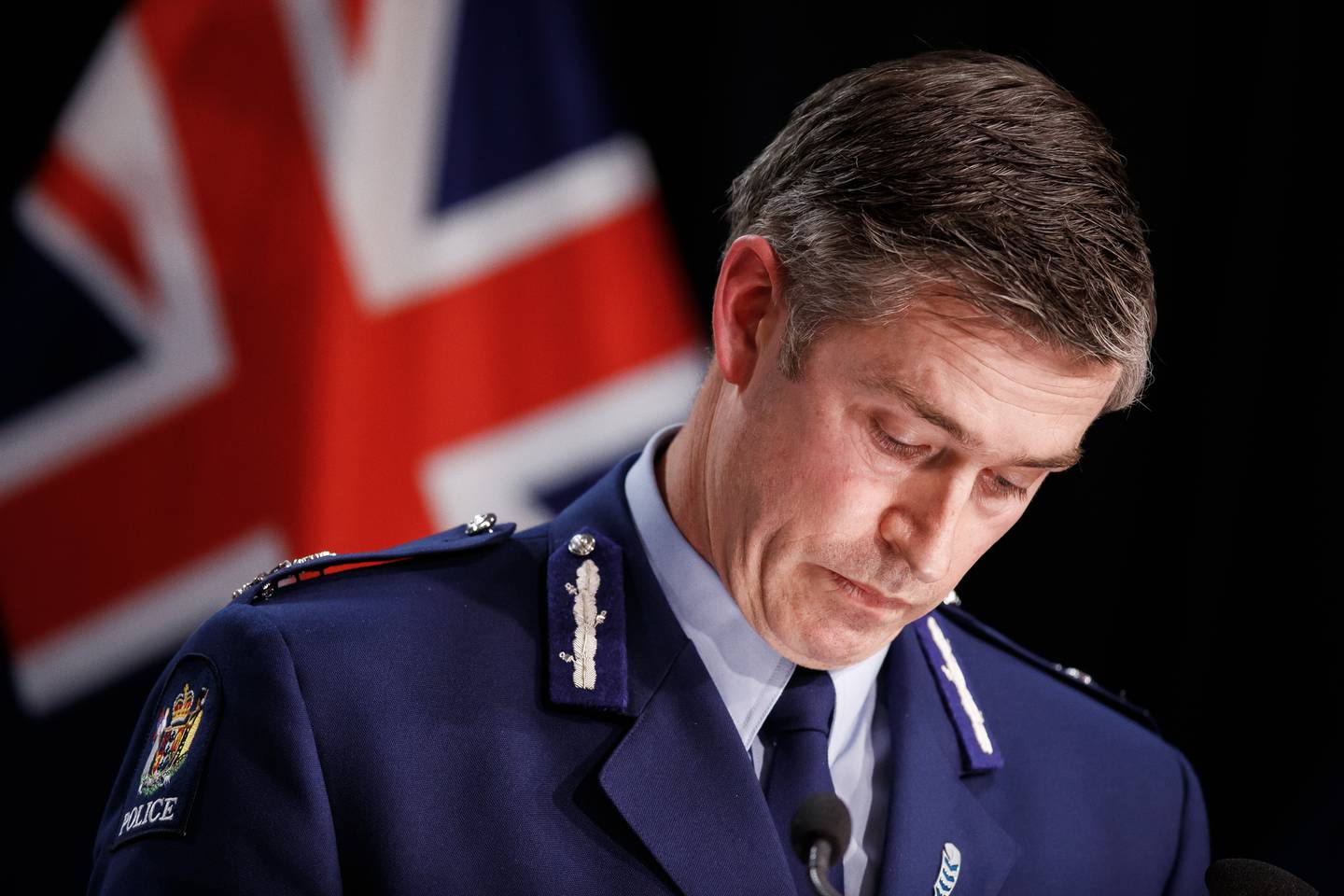 He had only recently been released from prison and was under constant surveillance from police, including an armed tactical team, and national security agencies.

Ardern said information about the 32-year-old attacker was covered by court suppression orders, which meant she could not reveal everything about him as she would have liked to last night.

But “in my view it is in the public interest to share as much as we can” when they were able to legally.

“I know there will be many questions about this case and we have to confront and address each and every one of them,” she said. A number of inquiries into the attack had already been launched last night, including by the Independent Police Conduct Authority (IPCA) and the Coroner.

The Prime Minister indicated she had prepared a timeline of the individual’s past that she intends to share with the public in the near future.

“You’ll see at every point the attempt we’ve made to use the law to the greatest extent we could,” Ardern said.

“The fact that he was in the community will be an illustration of the fact that we haven’t succeeded in using the law to the extent we would have liked. That is why he was being closely monitored at all times.

“We have utilised every legal and surveillance power available to us to try and keep people safe from this individual.”

Touching on the man’s extremist views, Ardern described them as a “violent ideology and Isis-inspired”, adding she was confident the man was a lone-wolf attacker.

“He obviously was a supporter of Isis ideology. So however you choose to describe that.”

Auckland City Hospital had multiple operating theatres running last night to treat the injured, who had suffered chest and neck wounds. Two major abdominal cavity surgeries were under way, the Herald was told.

Coster confirmed none of the innocent people injured in yesterday’s attack was a police officer.

Ardern also made a plea to the public to cast the responsibility for yesterday’s attack purely with the individual, and not a religion or ethnicity.

“What happened today was despicable, it was hateful, it was wrong,” Ardern said.

“It was carried out by an individual, not a faith, not a culture, not an ethnicity, but an individual person who was gripped by ideology that is not supported here by anyone or any community. He alone carries the responsibility for these acts. Let that be where the judgment falls.”

The Prime Minister also assured she expects no reprisal attacks against the local Muslim community, despite a mosque on Waikaukau Rd in Glen Eden, West Auckland, being under heavy police guard yesterday.

“The community here has been nothing but helpful and supportive,” Ardern said.

“It would be wrong to direct any frustration at anyone beyond this individual. That is who is culpable, that is who is responsible. No one else.” 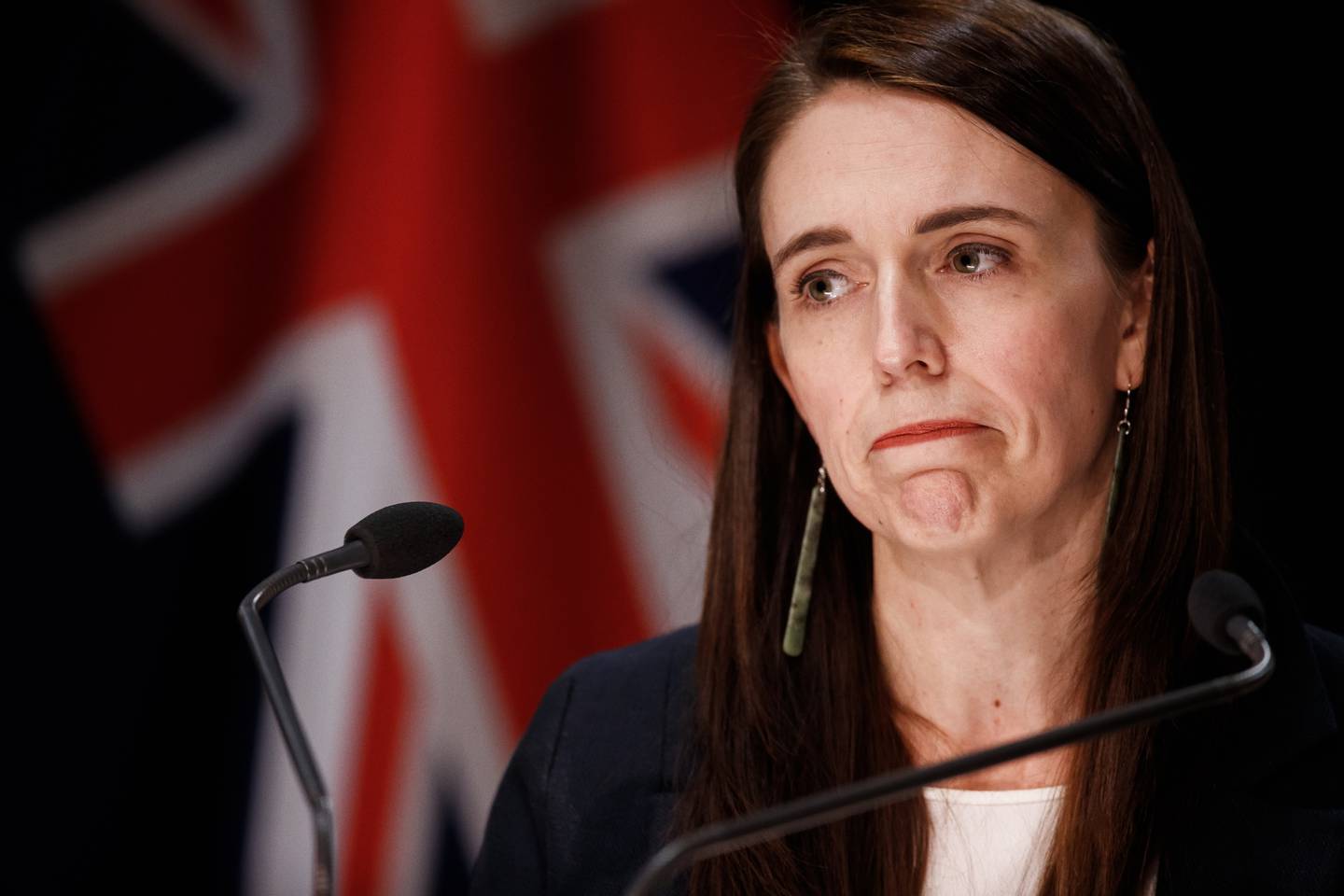 Ardern also dismissed suggestions that a new Counter-Terrorism Legislation Bill currently coming back from select committee could have prevented yesterday’s attack if it had been in place.

“It’s purely speculative to say whether any difference in our law, or indeed any of the law changes we are pursuing now, would have made a difference in this case,” Ardern said.

“We’d already been progressing that, that law change is coming back from select committee, due to be back in the House, so that was under way.

“It would be really speculative of us to make an assumption that what happened here today would have necessarily been prevented by a law change that we’re currently progressing.”

“My body grew hot, I began shaking and felt sick.”

That’s how Temel Atacocugu reacted when he heard of another terror attack on New Zealand soil.

Atacocugu was shot nine times on March 15, 2019 during the Christchurch mosque shootings and yesterday’s horror in New Lynn brought back memories of that day.

“The storm inside me began again. I understand their fear. And I know how difficult this will be for their families as well. I pray for their speedy recovery, because they do not deserve this,” he said.

He felt the New Zealand authorities had failed again.

“As a survivor of terrorism, I want as soon as possible for the Government to show accountability for 3 September, 2021, just like the accountability that was demanded of them following 15 March, 2019. This attack should be treated exactly the same,” he said.

“Terrorism only kills innocent people and worshippers. ISIS does not represent Islam or Muslim people,” he said.

His message to the six victims of yesterday’s supermarket attack:

“Kia kaha – from one terror victim to another”.

Al Noor mosque, where 44 people were killed in the March 15 attacks, has raised nearly $5000 to support vicitms of the supermarket terror stabbings.

Extremism increasing according to SIS

A 2020 annual report from the New Zealand Security Intelligence Service said: “During the past year, between 30 and 50 individuals have been under active investigation by the NZSIS in relation to violent extremism at any one time.”

The number was higher than in recent years, the report said, due to investigations into politically motivated violent extremism, including white-identity extremism.

“That said, faith-motivated violent extremism continues to appeal to a minority of individuals in New Zealand,” the report said.

“Terrorist violence is most likely to come from lone actors, including those who may mobilise to violence rapidly with little or no warning. Our active investigations include a small number of New Zealanders who are believed to remain in Syria or Iraq with ISIL [Isis] or other extremist groups.”

Ron Klink: Will Biden’s Commerce department say no to Chinese dumping and save American jobs?

Ron Klink: Will Biden’s Commerce department say no to Chinese dumping and save American jobs?