Former Defense Minister Yasukazu Hamada will return to the job and Yasutoshi Nishimura, who was in charge of the government’s COVID-19 response, will serve as industry minister in a revamped Cabinet, senior administration sources said Tuesday.

The lineup is expected to be announced on Wednesday as Kishida apparently aims to boost flagging public support amid controversy over the relationship between LDP lawmakers and a contentious religious group and a state funeral for Abe.

Hamada will replace incumbent Nobuo Kishi, a change being made in apparent consideration of his health. He will head the Defense Ministry when Japan is seeking to rework its defense posture amid threats from its neighbors such as China and North Korea, along with Russia.

House of Representatives member Hamada previously served as defense chief between 2008 and 2009. He is a son of Koichi Hamada, a former LDP lawmaker known for his fiery behavior in parliament and elsewhere.

Among other Cabinet posts, Minoru Terada, an adviser to the prime minister, will serve as internal affairs minister and former health minister Katsunobu Kato will return to the post, the sources said.

The personnel revamp will be the first since the LDP and its coalition partner Komeito clinched a sweeping victory in the election for the House of Councillors, the upper house, on July 10.

Kishida cited COVID-19, rising inflation, Russia’s war in Ukraine and a spike in tensions across the Taiwan Strait as pressing issues that need to be tackled.

“We are confronted with major challenges unseen in the postwar era and unity among the government and the ruling parties is more important than ever,” Kishida told a press conference in Nagasaki, where he attended a ceremony to mark the 77th anniversary of the U.S. atomic bombing of the city. 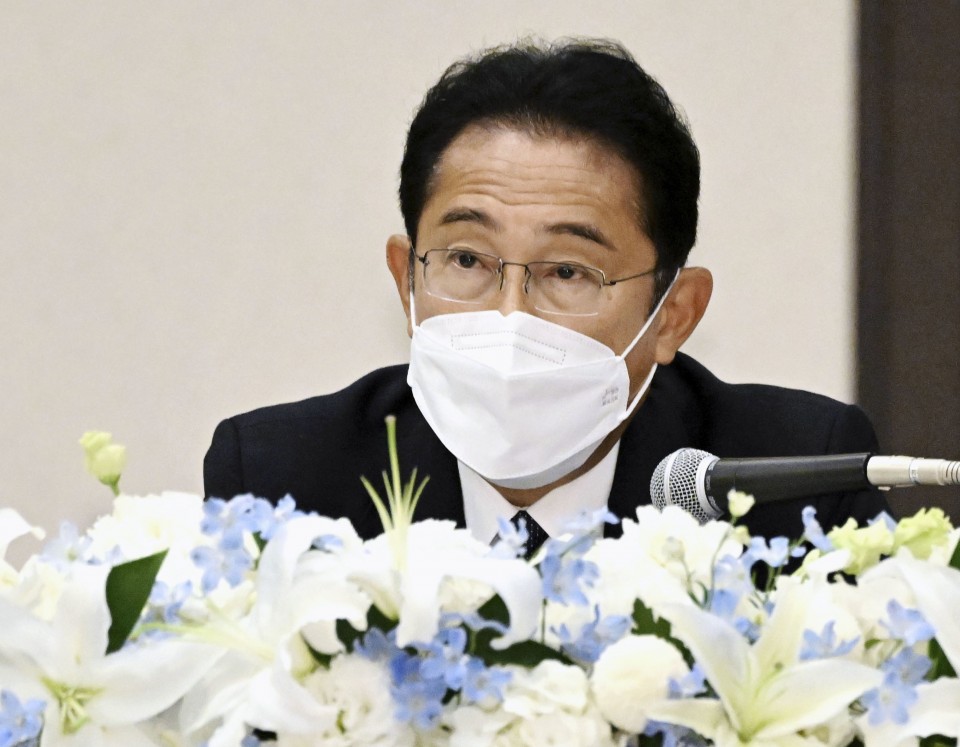 Japanese Prime Minister Fumio Kishida speaks at a press conference in Nagasaki on Aug. 9, 2022, the 77th anniversary of the U.S. atomic bombing of the southwestern Japan city in the closing days of World War II. (Pool photo) (Kyodo) ==Kyodo

Separately, industry minister Koichi Hagiuda is expected to become chairman of the LDP Policy Research Council, the sources said, despite his stated wish to stay on as head of the ministry.

Hagiuda is a close aide to Abe and a member of the largest intraparty group previously headed by the former premier.

Among other key posts, Hiroshi Moriyama, who supported former Prime Minister Yoshihide Suga with LDP heavyweight Toshihiro Nikai, will likely be put in charge of the election strategy committee, the officials said.

Toshiaki Endo, the current election chief, is expected to be tapped as General Council chairman, they added.

The LDP has been rocked by the killing of Abe during campaigning ahead of the upper house election. The assailant has said he holds a grudge against the Unification Church and believes the former prime minister had ties with the religious group, according to investigative sources.

Kishida has asked all Cabinet ministers to check and clarify any links to the Unification Church, formally known as the Family Federation for World Peace and Unification, to dispel public doubts about its relationship with politicians.

“It is a prerequisite for new Cabinet members and party executives to check and strictly review ties with the group in question,” Kishida said.

The prime minister has seen public support for his Cabinet slip in media polls amid controversy over the Unification Church and a state funeral in September for Abe, the country’s longest-serving prime minister.

Followers of the Unification Church have been arrested in Japan and received court orders in connection with money illegally obtained from people through the use of threats, including the citing of “ancestral karma.”

Japan defense chief Kishi may be replaced in Cabinet reshuffle

Apple iPhone 14 Plus review: It’s an iPhone, but bigger

Apple iPhone 14 Plus review: It’s an iPhone, but bigger