Gold prices pulled back to $1,892 from an eight-month high of $1,908 during Monday’s APAC mid-day trading session after French media said that US President Joe Biden and Russian President Vladimir Putin agreed in principle to hold a summit about the Ukraine crisis, bringing hopes that the dispute can be resolved in a diplomatic way. This news cooled demand for safety and dampened the appeal of gold, which is perceived as a haven asset and hedge against geopolitical risks.

Meanwhile, US Secretary of State Antony Blinken and Russian Foreign Minister Sergei Lavrov will meet this week to discuss the Ukraine situation. The talk may also soothe market concerns if constructive progress is made.

Last Friday, US President Joe Biden warned about an imminent Russian attack after reports showed increased outbreaks of violence and ceasefire violations in the area. He also said that Russia may attack multiple Ukrainian cities including the capital of Kyiv, adding to worries about escalating geopolitical risks and disruptions in the supply of fuel, food and other essentials in Eastern Europe.

A slew of Fed officials expressed a moderate view about Fed tightening in recent days, backing liftoff in March without seeking a supersized (50bps) interest rate hike or a move in between scheduled policy meetings. This contrasted hawkish comments made by St. Louis Fed President James Bullard, who argued for a faster pace of tightening to rein in inflation. As a result, the implied probability of a 50bps interest rate hike at the March FOMC meeting has fallen to 15.3% from 49.2% a week ago, according to CME’s FedWatch tool (chart below). A moderated view on the March rate hike alleviated pressure on gold, which is non-interest-bearing. 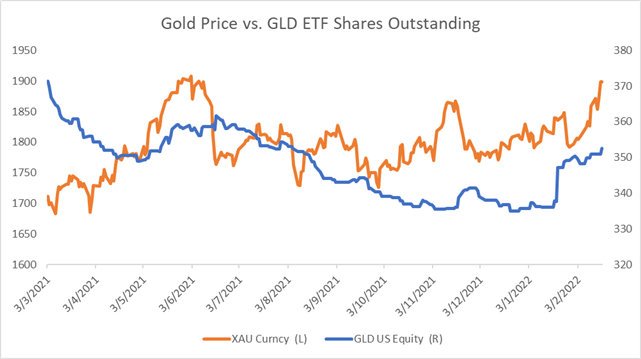 Technically, gold prices breached above a key resistance level of $1,876 and thus opened the door for further upside potential. The next resistance level can be found at $1,915 – the previous high seen in May 2021. The overall trend remains bullish-biased, as indicated by the formation of consecutive higher highs and higher lows. The MACD indicator formed a bullish crossover and trended higher, suggesting that buying pressure may be building. 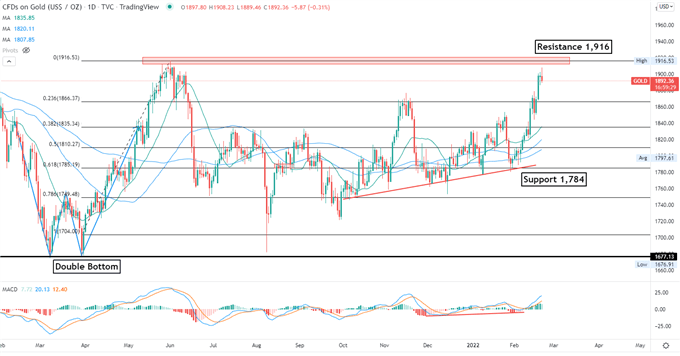