Exynos 2200 Launch Delay Everything You Need to Know

Samsung did not win any fans, and it certainly disgruntled its loyal customer base when it was rumored that the Exynos 2200 launch was postponed. Fingers were being pointed left, right, and center that the Korean giant has no business carrying forward with its custom chip department, and it should rely on Qualcomm from hereon.

However, every major company delays launch, and there was always going to be a ton of negativity over this decision given the hype surrounding the chipset, so why did Samsung proceed with this move, and how could it affect the Galaxy S22 unveiling? We discuss everything that you could be contemplating, and hopefully, we have the answers you seek.

Exynos 2200 Continues to Impress as Its Beats Snapdragon 8 Gen 1 in Multi-Core Tests, Despite Being Delayed

Exynos 2200 Was Mired With Problems, but These Only Started Manifesting When the Initial Launch Date Inched Closer

Samsung was going to make history with the Exynos 2200 by making it the company’s first smartphone SoC to launch with an AMD RDNA2 GPU, ushering a new plateau of graphical improvements with support for visually impressive features like ray tracing. Unfortunately, with something as game-changing as this, there were always going to be problems. As pointed out by notable tipster Ice Universe, initial results of the Galaxy S22 tested with the new SoC revealed GPU performance results that were worse than MediaTek’s Dimensity 9000 using ARM’s Mali GPU.

The Exynos 2100 made improvements in the CPU department by marginally beating the Snapdragon 888, and its only Achilles’ Heel was a weak GPU, something Samsung was supposedly ending with the Exynos 2200, but boy, were we in for a major surprise. We later got to know through the same Ice Universe, that Samsung’s chip department was going through its fair share of internal problems, and with massive hype built around the company’s upcoming flagship chipset, the last thing you needed was these kind of hurdles.

Samsung postponed the release of Exynos2200. Since last year, the release of Samsung exynos has not been smooth. In fact, the Exynos 1200 was originally planned in November, but it was cancelled halfway. It seems that many things happen inside Samsung LSI, but not a good thing.

At this point, there was speculation that Samsung could have outright canceled the Exynos 2200, but sure enough, the Korean tech behemoth did not reach its current position by giving up this easily. It put on its game face and according to an updated report, announced that the chipset’s launch would happen on the same day as the Galaxy S22 unveiling, which was during Galaxy Unpacked 2022 and scheduled to take place on February 8.

Keep in mind that the Exynos 2200 launch was supposed to happen on January 11, so pushing the unveiling by almost a month meant that there was no hiding that some tweaks to the SoC were in order. Given Samsung’s history of rushing launches, we can agree that no one wanted a re-run of the Galaxy Note7, though we cannot possibly fathom that the Exynos 2200 would end up in flames due to extreme overheating.

Companies that delay products like these only intend to polish them to avoid a barrage of complaints if the launch is rushed and no matter how hard Samsung tried hard to sell that its Exynos 2200 was without performance hiccups in the statement below, we are smarter than that.

“We are planning to unveil the new application processor at the time of launching a new Samsung smartphone. There are no problems with the AP’s production and performance.”

Of course, now with the delay comes the obvious question? Will it power the upcoming members of the Galaxy S22 series, or will Samsung have to proceed with a lineup that only consists of the Snapdragon 8 Gen 1?

Can This Delay Negatively Impact the Galaxy S22 Series Launch?

If the Galaxy S22 family launches with just the Snapdragon 8 Gen 1 powering its innards, it will immediately give the impression that the Exynos 2200 was not ready, despite Samsung’s claims about its performance. A different tipster, who goes by the Twitter handle Dohyun Kim, said that in all markets, all Galaxy S22 models will feature Qualcomm’s flagship chipset. Now that is a terrifying thought for a company like Samsung because of two reasons.

For one thing, an all-Snapdragon 8 Gen 1 launch will permanently cement a thought in people’s heads that the Exynos 2200 was never ready, and it could bring about irreparable damage to the Korean manufacturer’s chip development arm. Secondly, with all the problems Qualcomm is supposedly facing in securing shipments of its Snapdragon 8 Gen 1 due to low yields of Samsung’s 4nm process, it could cause a shortage of Galaxy S22 units.

In that scenario, Samsung might be forced to jack up the price of each Galaxy S22 model, discouraging customers from upgrading, resulting in a massive decline in shipment numbers for 2022. Alternatively, Samsung could sell the Galaxy S22 series in limited quantities at a more competitive price, but the lack of availability of these handsets would result in the same deleterious results. Just to remind you, there is a rumor doing the rounds that every member of the Galaxy S22 range could be $100 more expensive than its direct predecessor that launched in 2021.

Despite having its own foundry business, Samsung is not immune to chip shortages, which is why it was forced to launch the Galaxy S21 FE much later compared to the previous-generation model, the Galaxy S20 FE, which by the way, sold immensely well due to its attractive price-to-performance ratio.

What Sort of Tweaks Is Samsung Expected to Make to the Exynos 2200 to Give Its SoC Division a Fighting Chance?

As mentioned above, the Exynos 2200’s AMD RDNA2 was running into performance issues that were rumored to be caused by overheating problems. Apparently, Samsung was targeting a high GPU clock speed to achieve an unrivaled authority in the smartphone space and possibly even holding its own against Apple’s A15 Bionic. Unfortunately, it was unable to maintain its desired frequency of 1.90GHz, forcing Samsung to reduce those speeds to prevent temperatures from rising and eventually result in thermal throttling. 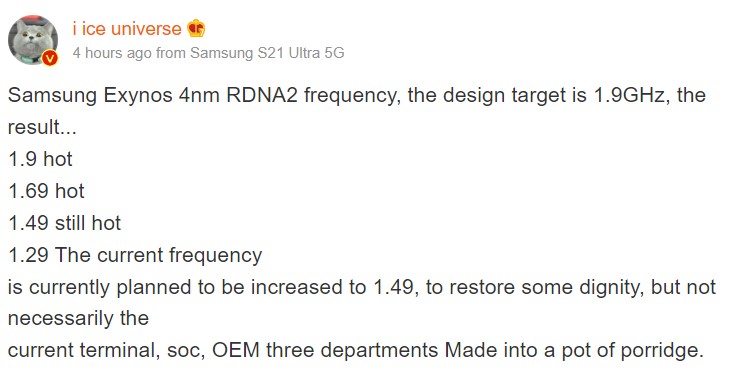 Currently, given the number of resources and talent Samsung has acquired, it has all the time in the world to make appropriate adjustments to the AMD RDNA2 GPU and prove to the world that it is still a relevant force in the smartphone chipset category. Hopefully, Samsung will demonstrate its claims on February 8, and like always, we will be here to provide our readers with all the necessary updates, so stay tuned.

All Dark Souls PC Servers Offline Due To Multiplayer Exploit

All Dark Souls PC Servers Offline Due To Multiplayer Exploit