We expect the index to return to the cautious rise during its upcoming trading.

The Dow Jones Industrial Average declined during its recent trading at the intraday levels, to record slight losses in its last sessions, by -0.20%, to lose the index about -62.42 points to settle at the end of trading at the level of 31,438.27, after its rise in Friday’s trading by 2.68% .

Eleven of the 30 stocks listed in the index declined, with Salesforce Inc. By -2.48%, on the other hand, only nine stocks rose, led by the share of UnitedHealth Group Inc. By 2.02%, while two shares remained unchanged at all.

After traders entered the weekend with a flurry of activity on Friday afternoon, the week opened quietly, as stocks managed to rise at the end of last week’s trading. This is after Federal Reserve Chairman Jerome Powell acknowledged the possibility of a difficult pullback, which the market took as an indicator to reduce the prospects for a rally. Interest rates are very sharp, this rally in stocks was also supported by moderate economic data.

In economic news, US durable goods orders rose more-than-expected in May, the Census Bureau said Monday that new orders increased 0.7% to $267.2 billion last month, after rising 0.4% in April.

A report from the National Association of Realtors said Monday that US pending home sales rose 0.7% in May. That’s a surprising gain compared to the expected 4% drop in a Bloomberg poll. While the Dallas Fed manufacturing survey fell to negative 17.7 in June from negative 7.3 in May.

Technically, the index is trying with its recent decline to reap the profits of its previous highs, and to try to gain some positive momentum that may help it to record new heights. This is amid the stability of its trades above the main support level 31,000, with the influx of positive signals on the relative strength indicators. In front of that, downward corrective trend dominates on the movement of the index in the short term. In addition, we notice the continuation of the negative pressure for its trading below the simple moving average for the previous 50 days.

Therefore, we expect the index to return to the cautious rise during its upcoming trading, as long as it remains stable above the support level 31,000, to target the resistance level 32,578.70. 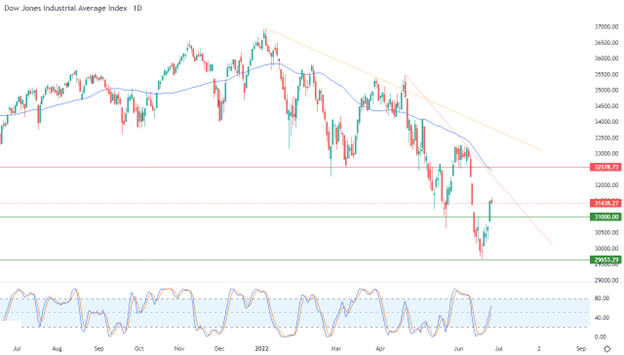 300 wounded Wagner mercenaries brought to hospital in Luhansk Oblast, but ‘doctors refuse to treat them’