It may seem like Google has only just released Chrome 93 to the stable channel, but with the company’s faster four-week release cycle, stable Chrome 94 is now already available for download. You can get it over at APK Mirror or wait until it rolls out to you on the Play Store. Even though only four weeks have passed, the new release packs quite a few interface updates and changes under the hood.

Material You tweaks for Chrome on Android

As we already detailed extensively when we first spotted this in the Canary channel, Chrome 94 comes with a whole slew of sleek Material You changes on Android 12. The new visual identity aims to unify app design across Android 12 and pulls its color from your wallpaper by default, which is why Chrome might not look the same across any two phones going forward. The tweaks are visible on the new tab page, the address bar, and the tab switcher, but you need to activate two flags to make the changes show up: chrome:flags#dynamic-color-android and chrome:flags#theme-refactor-android.

Chrome 93 was the first release to add a few Material You tweaks, but Chrome 94’s iteration looks much more complete, though I wouldn’t be surprised if Google added these design elements in a few more places, like settings, various menus, and the share sheet.

Google is also working on a small redesign for desktop Chrome. When you enable the chrome:flags#webui-branding-update flag, you’ll get to see refreshed Chrome system pages, like settings, history, and more. The tweaks are part of Google’s WebUI update, an umbrella term for the design Google uses for parts of Chrome’s interface and web technologies like HTML and JavaScript. If the look is familiar, that’s because Chrome OS recently received a similar makeover, with Google removing the blue top bar in favor of an all-white design that’s more easily themeable.

You can see more details and examples over at our dedicated coverage on the redesign. 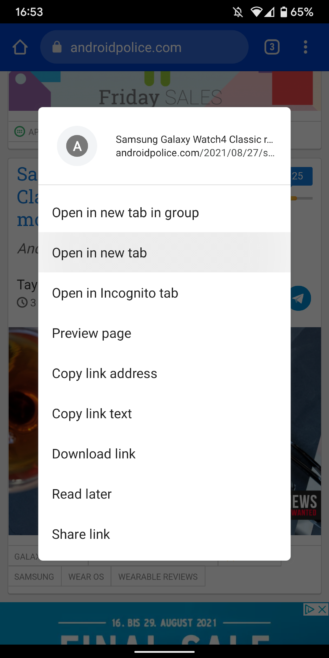 Google’s introduction of tab groups on mobile Chrome has been controversial, to say the least, with many users virtually revolting against the change and wishing for a way to get rid of the forced groups completely. While Chrome 94 isn’t exactly doing that, it’s making it easier to avoid using tab groups when you just want to open a link in a new tab. The browser is re-adding an “open in new tab” shortcut to the long-press menu, which now lives alongside the “open in new tab in group” option.

Chrome 94 introduces an optional toggle under Settings -> Privacy and security that allows you to always use secure connections. The feature automatically upgrades all available HTTP connections to the much more secure HTTPS standard and, if a website doesn’t support that, hinders it from loading. Instead, Chrome will display a banner warning you that the HTTP connection isn’t secure and encourages you to not visit the website in question, though you can still override this warning by taping “Learn more.” 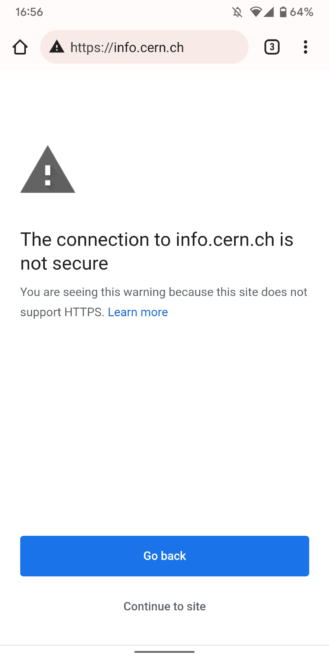 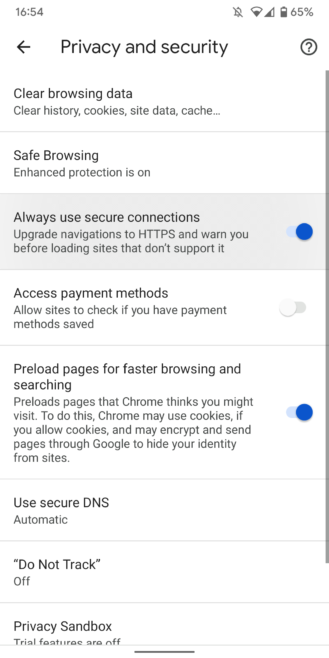 info.cern.ch, the home of the first-ever website, does not support HTTPS — which makes sense.

This behavior is part of Chrome’s HTTPS-First mode, which will eventually become the default for the browser. In the same vein, Google is experimenting with getting rid of the lock icon for HTTPS sites, since many people think it means that what they visit is a trusted site of some sort, even if that’s not true. You can read more about this topic here.

The Chrome 94 desktop version comes with a controversial new feature: idle detection. The API notifies developers when a user is idle, “indicating such things as lack of interaction with the keyboard, mouse, screen, activation of a screensaver, locking of the screen, or moving to a different screen.” Google’s motivation behind the feature is collaborative applications which the company thinks need more cues about whether a user is idle or not.

Both Firefox and Safari developers deem the API harmful or negative, though, with concerns about user surveillance and user control. The feature could be misused to monitor usage patterns and manipulate them accordingly. A Mozilla developer writes, “I consider the Idle Detection API too tempting of an opportunity for surveillance capitalism motivated websites to invade an aspect of the user’s physical privacy, keep longterm records of physical user behaviors, discerning daily rhythms (e.g. lunchtime), and using that for proactive psychological manipulation (e.g. hunger, emotion, choice).”

Regardless, Chrome 94 enables the Idle Detection API by default.

As the Chromium team shared, the browser is adding support for a new WebCodecs API that makes it easier for developers to work with audio and video decoders and encoders, which should lead to significant improvements in latency-sensitive gaming and transcoding without requiring additional network and CPU strain that would come with JavaScript-based applications. This new API has been in testing for a while, but Chrome 94 is the first release of the browser that enables it by default.

Google is working on letting you lock down your incognito tabs with your phone’s screen lock or your biometrics, but even though there’s a flag, the feature isn’t working in Chrome 94 yet. We’ll report back once there’s more to this.

As always, Google has also published a developer-focused video explaining all the things that have changed under the hood. You can watch it on YouTube or read the detailed summary here.

Chrome 94 is currently rolling out on the Play Store, but you can also get it over on APK Mirror if you’re eager to activate the new design for yourself right away. Next in line is Chrome 95, which should roll out to the beta channel in the next few days and go stable in mid-October.

The article has been updated to reflect the stable release of Chrome 94. It previously covered the launch of the beta.

To Boris Johnson: The only way to stay in No 10 is to REALLY get Brexit done, writes NIGEL FARAGE

To Boris Johnson: The only way to stay in No 10 is to REALLY get Brexit done, writes NIGEL FARAGE