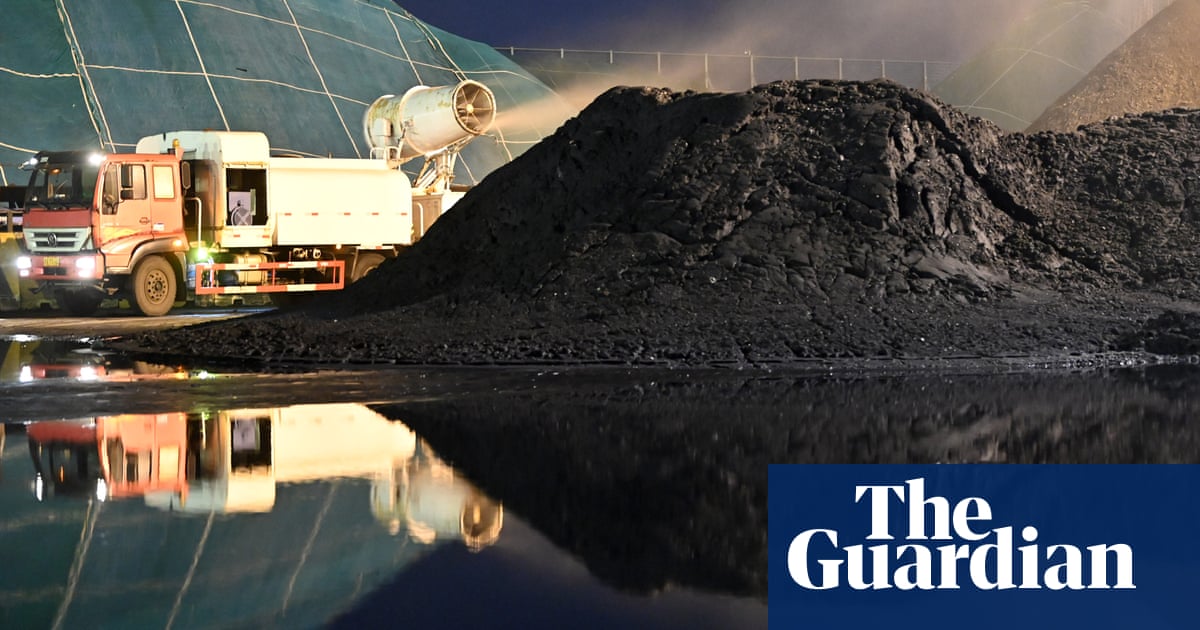 China plans to build more coal-fired power plants and has hinted that it will rethink its timetable to slash emissions, in a significant blow to the UK’s ambitions for securing a global agreement on phasing out coal at the Cop26 climate summit in Glasgow.

In a statement after a meeting of Beijing’s National Energy Commission, the Chinese premier, Li Keqiang, stressed the importance of regular energy supply, after swathes of the country were plunged into darkness by rolling blackouts that hit factories and homes.

While China has published plans to reach peak carbon emissions by 2030, the statement hinted that the energy crisis had led the Communist party to rethink the timing of this ambition, with a new “phased timetable and roadmap for peaking carbon emissions”.

“Energy security should be the premise on which a modern energy system is built and and the capacity for energy self-supply should be enhanced,” the statement said.

“Given the predominant place of coal in the country’s energy and resource endowment, it is important to optimise the layout for the coal production capacity, build advanced coal-fired power plants as appropriate in line with development needs, and continue to phase out outdated coal plants in an orderly fashion. Domestic oil and gas exploration will be intensified.”

Beijing’s ambitions for carbon dioxide output are seen as critical in the push to achieve global net zero carbon emissions by 2050 and fulfil the 2015 Paris agreement to limit average temperature rises to 1.5C. But Li said Beijing wanted to gather new evidence on when its peak emissions would be reached.

The statement said he had commissioned “in-depth studies and calculations in light of the recent handling of electricity and coal supply strains, to put forward a phased timetable and roadmap for peaking carbon emissions”.

Beijing’s renewed embrace of coal – apparently at odds with Xi’s state climate ambitions – are likely to cause alarm in the run-up to Cop26.

Alok Sharma, the UK’s president-designate of Cop26, has said an agreement to phase out coal power is a key aim of the summit.

George Magnus, a research associate at Oxford University’s China Centre and the author of Red Flags: Why Xi’s China Is in Jeopardy, said Beijing had been forced to revise its plans in the face of the reality of economic problems and power outages.

“China has stumbled into an energy crisis in much the same way the rest of us have done but it is exacerbated by the fact that the grid and the electricity companies are subject to price controls and cannot pass the prices on,” he said. “Many have decided to shut down production and they have had a lot of power outages for households and companies. This has come at a very bad moment in China, on top of [collapsed property giant] Evergrande and the property bust.

“They have basically cycled back on their coal policy. With Cop26 coming up, there is a lot of talk about how committed the Chinese are to net zero goals by 2050 but this is another setback. It has happened before, when the economy was weaker during the pandemic, that they relaxed restrictions on coal capacity. Now they are doing it again.

“If the new relaxations last a few weeks, it might not matter so much. If it lasts into 2022 as China strives to avoid bad economic outcomes ahead of its key CCP 20th party congress in November 2022, climate policy optimists might have to rethink for sure.”