Forget your plans for a quiet, relaxing summer. The stock markets of the world’s second largest economy are tumbling; and when Chinese equities turn bearish, it can be brutal. At one point during Hong Kong trading day on Wednesday, the Hang Seng Index fell close to 20% below its February peak.

This is unlikely to be a localized event. The big fear is a rerun of China’s stock market rout of summer 2015 which saw a 45% selloff. There were further major selloffs in early 2016 and 2018. The knock-on effect for emerging markets then saw average credit spreads rise by a quarter and the MSCI emerging markets equity ETF fall by over 25% in the second half of 2015 into early 2016. China’s latest stumble could lead to skinned knees around the world.

Beijing’s crackdown over the weekend on for-profit school tutoring is just one part of a much wider reshape of the tech economy in China. And it is more likely just a beginning, not the end of the process. It’s also becoming a major inflection point for global investors to evaluate Chinese and China-linked assets. As one recent analysis put it: “China doesn’t care how much money you lose.” Goldman Sachs Group Inc. and JPMorgan Chase & Co. will not be alone in turning cautious on Chinese stocks.

Reducing exposure quickly is what it’s all about. So we are now experiencing the ATM effect: Large cap liquid stocks are being sold first. Thus the drop in Chinese tech behemoths, such as Tencent Holdings, Alibaba Group Holding and Baidu Inc. But everybody is in the crosshairs and liquidity is quickly evaporating for lower-volume stocks. Indeed, there has been a notable increase in “southbound” liquidation, that is domestic Chinese investors selling off Hong Kong-listed stocks. The percentage of domestic equity trading on margin is also climbing rapidly towards 2015 highs. It is a precarious setup for an extended market correction.

But it won’t just be a domestic Chinese event. What happens in China now has major ramifications far beyond its nearby Asian economies. In Europe, the export-driven economies of Germany, the Netherlands and Italy are the most sensitive to a changing China governance model and a weakening yuan to the euro. Latin America and Africa are also increasingly reliant on either Chinese direct investment and trade.

Weakness in China-exposed currencies such as the New Zealand Dollar and the South African Rand was evident on Tuesday and could turn swiftly into a wider emerging market currency rout. The real problem comes if the Chinese Yuan starts to weaken substantially against the dollar. A stronger greenback is always a problem for most developing economies’ currencies but a potential sudden shift in the most important currency pair of them all presents a multitude of problems at the same time.

There is an increased risk of foreign capital flight if a developing nation’s currency suddenly weakens, potentially forcing its central bank to raise interest rates sharply. A concomitant stronger dollar exacerbates this as money around the world flies to the safety of the global reserve currency. Furthermore, because most commodities are priced in dollars, the cost of vital raw material imports just goes higher. It is already pushing emerging market credit spreads wider. 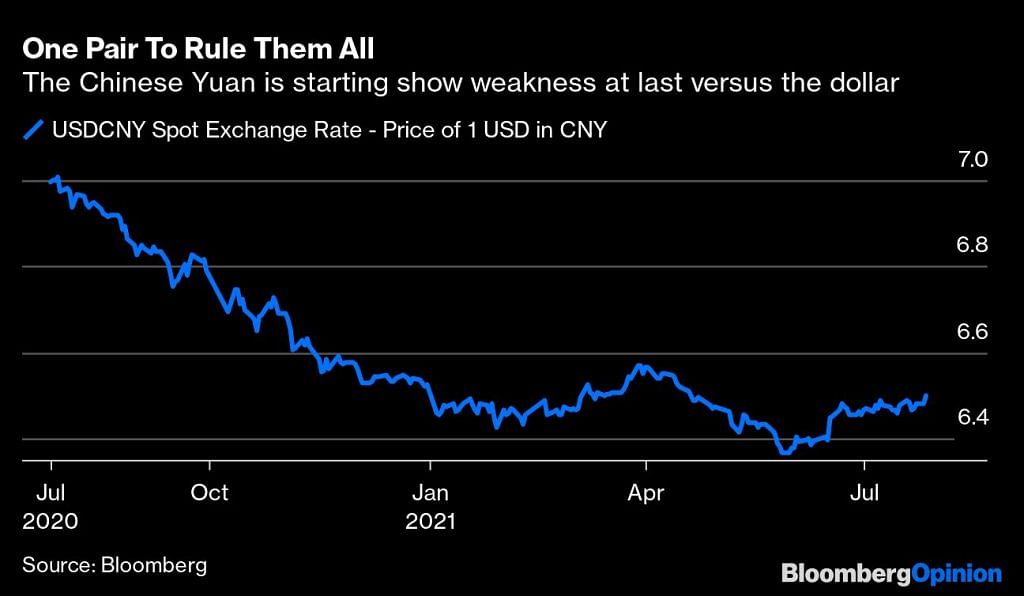 Meanwhile, the so-called “China Discount” is certainly likely to get larger as the cost of lending money either via bonds or stocks to Chinese-related entities will likely rise as additional compensation for risk is required.

Beijing is intent on showing Big Tech that the Communist Party is boss and is therefore unlikely to steady panic selling anytime soon. And the markets aren’t about to calm down with the Biden administration talking about restricting U.S.-based funds from investing in China or Hong Kong equities. There is considerable hedge fund and real money exposure in all this interconnectivity. So expect a very poor end to July for some leveraged funds.

Of course, this may yet prove transitory. Even so, it should serve as a wake-up call for international investors and governments alike on the ramifications of China’s vast sprawl.-Bloomberg

Why news media is in crisis & How you can fix it

But the news media is in a crisis of its own. There have been brutal layoffs and pay-cuts. The best of journalism is shrinking, yielding to crude prime-time spectacle.

ThePrint has the finest young reporters, columnists and editors working for it. Sustaining journalism of this quality needs smart and thinking people like you to pay for it. Whether you live in India or overseas, you can do it here.

As the Bitcoin price hits $24k, should I buy cryptocurrency stocks?