Bitcoin (BTC) starts a new week with traders still digesting the impact of the last — a major price drop that at one point saw $41,900.

A modest recovery is now competing with some formidable resistance, the first of which is $50,000.

As a sense of déjà vu pervades markets, analysts are coming to terms with the fact that the end of Q4 2021 will likely not produce the blow-off top that they had anticipated.

There is also concern that another, deeper, BTC price floor may have to enter before a genuine recovery takes place.

What could happen in the last few weeks of the year? Cointelegraph takes a look at five factors on everyone’s radar for the coming week.

Against all-time highs of $69,000, the maximum loss overnight on Friday is so far 39% — significant, yet by no means record-breaking in Bitcoin terms.

As price predictions dry up, attention is now focusing on a revival into 2022.

“For what it’s worth, my base case is that we consolidate/range till EOY, carve out a regime of mixed-negative funding rates/premium, before bullish Q1,” William Clemente forecast in a Twitter discussion.

A focus on the sustainability of price recovery will be derivatives markets after their cascade of position liquidations.

Friday’s events managed to somewhat “reset” open interest on Bitcoin futures to levels last seen in September at similar price levels to the pit of the dip.

Macro markets are already on a knife-edge, but this week may add some familiar fuel to the fire in the form of fresh consumer price index (CPI) data.

Due for November, United States CPI readings are tipped to outstrip even October’s shock 6.2% year-on-year reading.

Economists’ prognoses were noted by Lyn Alden, financial commentator and founder of Lyn Alden Investment Strategy. She added that housing, a lagging indicator not as present last month, would likely be a factor in the results.

Inflation already hit the headlines again last week after Jerome Powell, chair of the Federal Reserve, appeared to imply that “transitory” was no longer an apt description of it.

Bitcoin immediately reacted, and bulls will be keenly eyeing the new CPI data in the hope of a similar knee-jerk response to that from October.

The cryptocurrency, despite recent volatility, is argued to be the best possible workaround for purchasing power protection, not least as inflation is in fact much higher when assets not covered by CPI are factored in.

“Everyone has double-digit inflation if they measure it correctly and needs Bitcoin more than they realize,” MicroStrategy CEO Michael Saylor, a well-known CPI critic in Bitcoin circles, warned late last month.

Meanwhile, central bank money printing, notably by the Fed, recently attracted public criticism from the head of another sovereign state.

Bitcoin faces a “giant” futures gap this week — one so large that it may not close immediately, but traders should not forget about it, said Cointelegraph contributor Michaël van de Poppe.

With derivatives traders only adding to downside pressure o the weekend, futures may nonetheless form a target for positive momentum.

In line with tradition, BTC/USD may well rise to “fill” that gap, paving the way for at least a reclaim of $50,000 and support and possibly even its $1-trillion market capitalization.

“Quite often, like 99% of the time, they close at some point. At least an important level to watch coming weeks if the market continues to bounce for Bitcoin.” 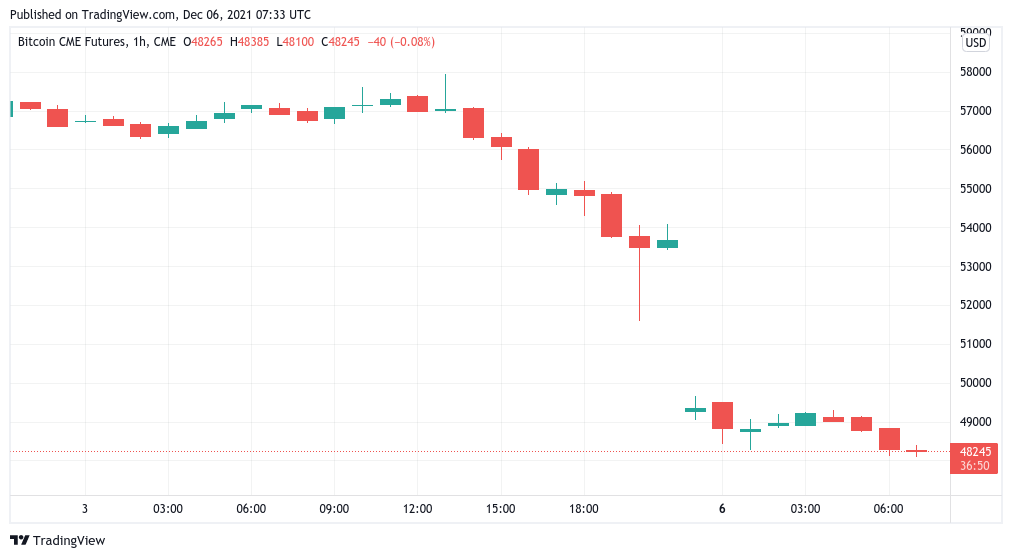 The dip, meanwhile, succeeded in closing a previous gap to the downside that appeared at the end of November.

“Some minimal movements on the markets during the weekend, but I expect the real volatility to kick in when the weekly opens and the futures for USA launch again,” van de Poppe added.

Despite being just months after September’s price wobble, last week’s mayhem is drawing the most comparisons to the events of March 2020.

Then, as is now, the coronavirus formed the backdrop to instability, with BTC/USD selling off dramatically in a run that totaled 60% over the course of a single week.

This time around, the stakes were not as high, leading to descriptions of a “mini” rerun this month.

One key difference lies in market composition: 18 months ago, leveraged traders and their influence on the markets were a much smaller phenomenon.

“This Bitcoin dip was NOT driven by sentiment,” Danny Scott, CEO of exchange CoinCorner, said in a series of tweets Saturday.

“It was driven by gamblers leveraging and being liquidated. Sentiment is still very Bullish.”

While sentiment remains intact, Scott argues, the timing is serving to upend the positive mood and hopes that 2021 will finish with a boom rather than a bust. March 2020 saw a slow recovery from the lows, which only accelerated around eight months afterward.

Meanwhile, a look at the Crypto Fear & Greed Index highlights the shock among many market participants, with 16/100 marking both “extreme fear” and its lowest score since July.

“The fear hasn’t been so low since May’s crash,” van de Poppe added about the Index.

“The sentiment is literally comparable to a funeral. I like it.”

One aspect of Bitcoin that is looking anything but bearish? Network fundamentals.

Even a dip to $42,000 was not enough to compromise performance, and the hash rate — a measure of the computing power dedicated to the network — remains near all-time highs.

Different estimates give different definitions of what was really the highest-ever Bitcoin hash rate tally.

According to the popular MiningPoolStats resource, the hash rate is at its highest-ever sustained levels. 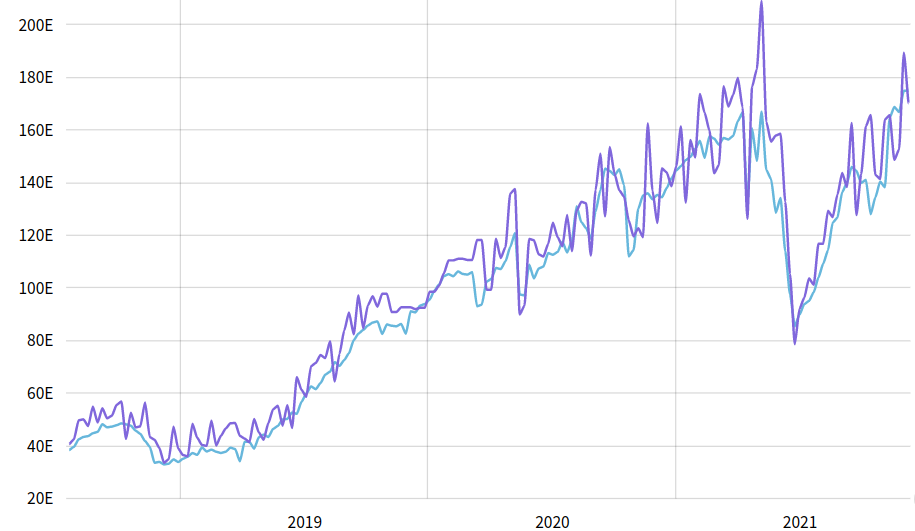 Blockchain.com’s seven-day average currently stands at 162 exahashes per second (EH/s) — meanwhile, 18 EH/s off the pre-China crackdown record in May. 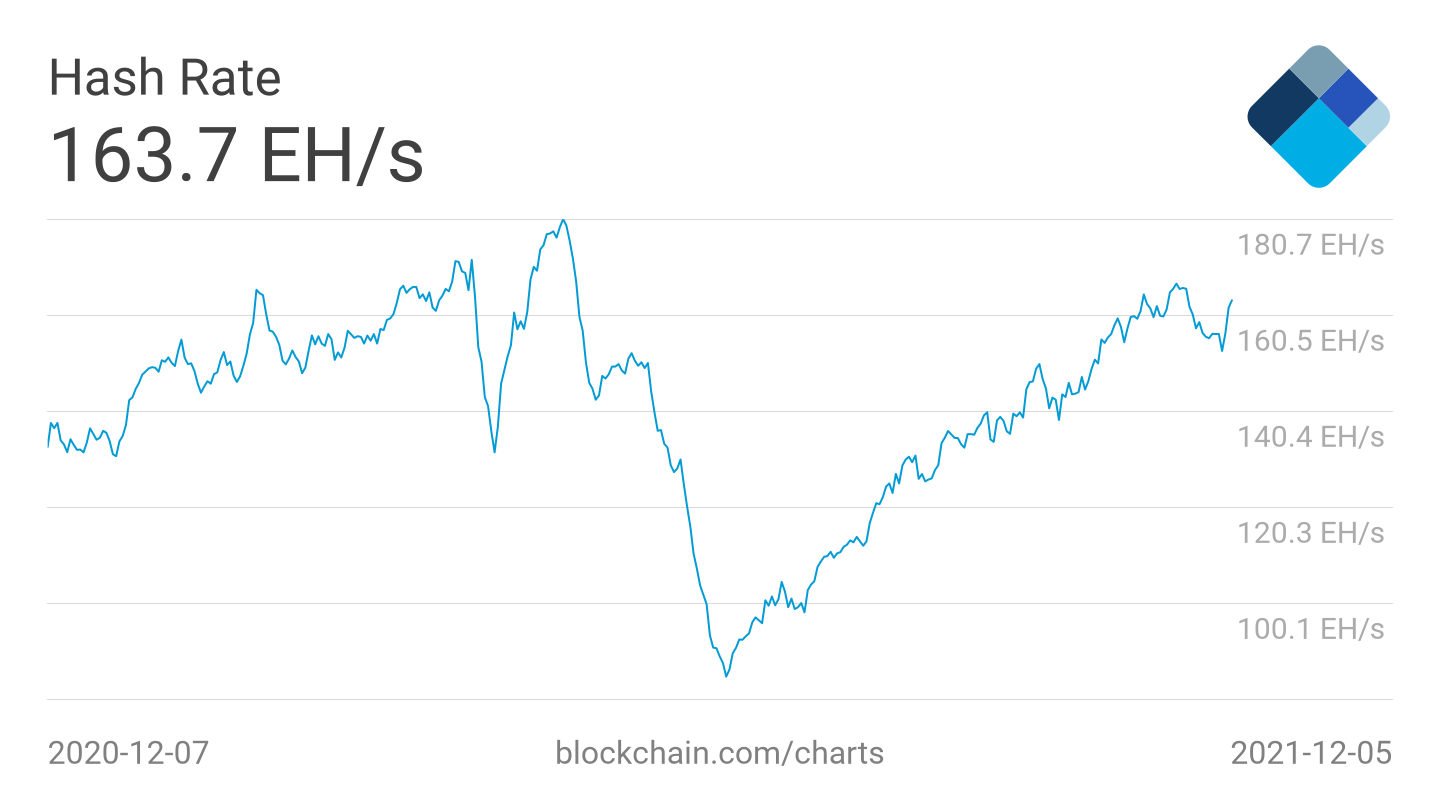 Difficulty, which keeps Bitcoin in balance regardless of hash rate changes, is now set to increase by just under 1% in six days’ time. Previously, the metric was slated to decline for a second period running.