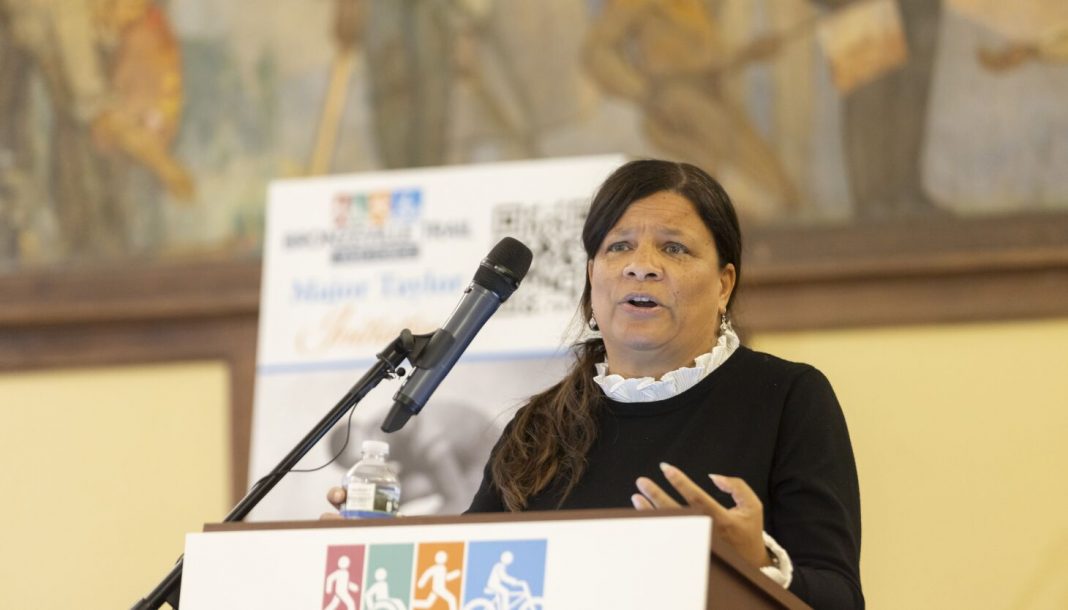 A group of supporters and cyclists want to change that with a three-pillar plan to bring awareness to Taylor’s accomplishments in cycling.

Supporters gathered Tuesday at the historic Wabash Avenue YMCA — a place Taylor once called home — to kick off a petition asking Congress to pay tribute to Taylor with a Congressional Gold Medal, the highest level of national recognition for an individual’s achievements bestowed by Congress.

Taylor faced enormous racial obstacles during his career at the top of a largely white-dominated sport and spent his final years living in poverty in Chicago, where he died in 1932. Because of his financial struggles, he lived at the YMCA Hotel in Bronzeville.

“This is a great day to come together to celebrate and to preserve the legacy of the greatest cyclists ever to live,” state Rep. Kam Buckner — who is also a candidate for mayor of Chicago — said at the news conference. “Major Taylor was more than just the Jackie Robinson of cycling. He not only carried the weight of tremendous racism and prejudice, but he represented greatness and dignity around the world during the Golden Age of cycling.”

Months ago, the Bronzeville Trail Task Force, a group overseeing the creation of the neighborhood trail, passed a resolution dedicated to Taylor. The three pillars of the resolution include building a monument to Taylor, commemorating his image on a postage stamp and asking Congress to award a him Congressional Gold Medal.

The news conference Tuesday marked the launch of the national campaign to honor Taylor with the Congressional Gold Medal. A petition was created to “compel Congress” to award Taylor with the medal that cyclist Greg LeMond recently received in 2020, Bronzeville Trail Task Force founder John Adams said.

Pieces of Taylor’s legacy can still be spotted around the area. An eight-mile trail is dedicated to Taylor in Chicago, which runs from Dan Ryan Woods south to Whistler Woods. There are local Major Taylor cycling groups that ride daily with Taylor’s likeness and name emblazoned on their gear, and there’s an estimated 80 groups nationally that ride in honor of Taylor.

“This is much bigger than one trail or one neighborhood community,” said Brenda Dixon, vice president of the Friends of the Major Taylor Trail. “When we talk about athletes, like Michael Jordan or Jesse Owens, we should all be talking about Major Taylor first. We all stand on the shoulders of Major Taylor. So we need to support this 110%, so let’s get this done in Bronzeville.”

According to a news release from the Bronzeville Trail Task Force, U.S. Rep. Danny K. Davis (D-Ill.) intends to sponsor the bill.

Mariah Rush is a staff reporter at the Chicago Sun-Times via Report for America, a not-for-profit journalism program that aims to bolster the paper’s coverage of communities on the South and West sides.