Working pumpjacks are seen in the Montebello Oil Field in Montebello, California, on Wednesday. (Photo: AFP)

Brent oil surged to US$100 a barrel for the first time since 2014 as Russia’s dramatic escalation of the Ukraine crisis sparked fears of a disruption to the region’s critical energy exports.

Futures in London jumped as much as 3.3% after a report that Russia’s President Vladimir Putin has decided to conduct a special operation to “protect” the Donbas region. This week, Putin announced he had sent “peacekeeping forces” into the two separatist regions recognised by Moscow, heightening fears among western governments of a full-blown invasion of Ukraine.

Russia is a key supplier of energy to global customers, with Europe relying on the nation for about a quarter of its oil supplies and a third of its gas.

Bitcoin’s swings during the past weeks of escalating geopolitical tensions have served to undermine the argument that cryptocurrencies offer a hedge in times of trouble. The traditional haven gold, meanwhile, surged to the highest level since early 2021 on Thursday.

“Risk assets continue to be weighed down by the Russia-Ukraine conflict and tensions. This includes Bitcoin and cryptocurrencies which are currently still very much viewed as a high-risk asset class,” said Vijay Ayyar, vice president of corporate development at Luno, a crypto platform. 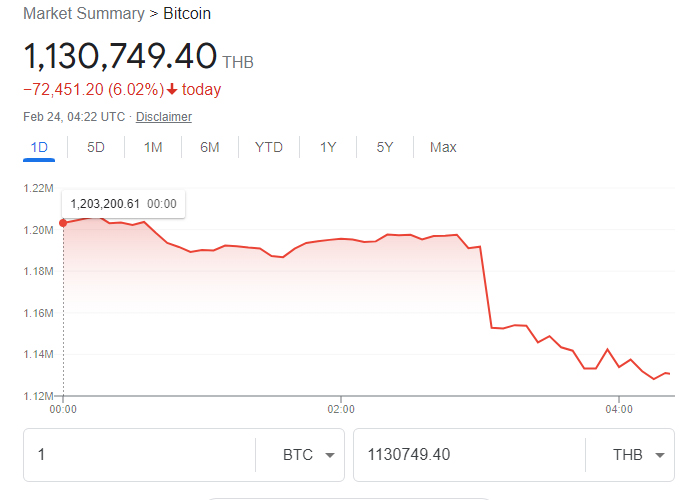 A screen capture of the Bitcoin market.

Five Things You Need to Know to Start Your Day