The Bitcoin market has fallen again during the trading session on Thursday to break back below the $20,000 level. At this point, it looks as if it is going to threaten the lows, closer to the $18,000 level. By all accounts, Bitcoin is nowhere near done selling off, and I do think that we have the ability to pick up Bitcoin at much lower levels. It is because of this that I have not been active in this market, nor do I think that it is one that you need to be worried about at the moment. The market will continue to see a lot of negative headwinds, especially as so much of the crypto world has imploded.

Tightening financial conditions continue to be a major problem for cryptocurrency markets and the rest of the financial world, and that is not going to change anytime soon. It is because of this that I think you have plenty of time to get involved, as we are almost certainly going to enter a significant “crypto winter.” That being said, what you will more likely than not see is a level where people were willing to sit on the sidelines, and bigger traders start to accumulate.

The market has formed a massive “H pattern”, suggesting that it has further to go. Based on the measured move, you could see Bitcoin drop all the way down to the $10,000 region without much surprise. I anticipate somewhere between there and the $12,000 level, you will see more of a fight to stabilize. Once we start to see a lot of sideways action and seemingly nonchalant trading behavior, I will start accumulating. However, we are nowhere near that right now, and this is a market that still looks like sellers are out there waiting to get rid of it.

The US dollar strengthening has been like a wrecking ball for a lot of financial assets, and Bitcoin has proven itself to be no different than the others. For me, it has nothing to do with adoption, religion, or other such nonsense you hear around the Bitcoin world. For me, it’s about price. After all, Bitcoin is measured in US dollars, which probably tells you everything you need to know. Ultimately, it’s not until the US dollar loses strength that Bitcoin even has a chance. 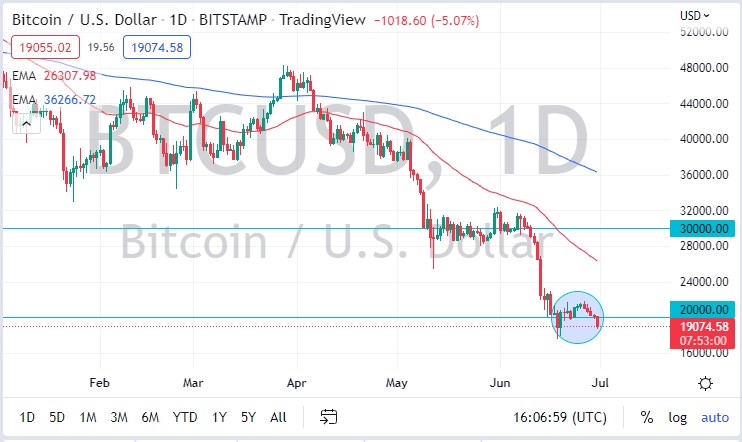 How Russia Is Surviving the Tightening Grip on Its Oil Revenue