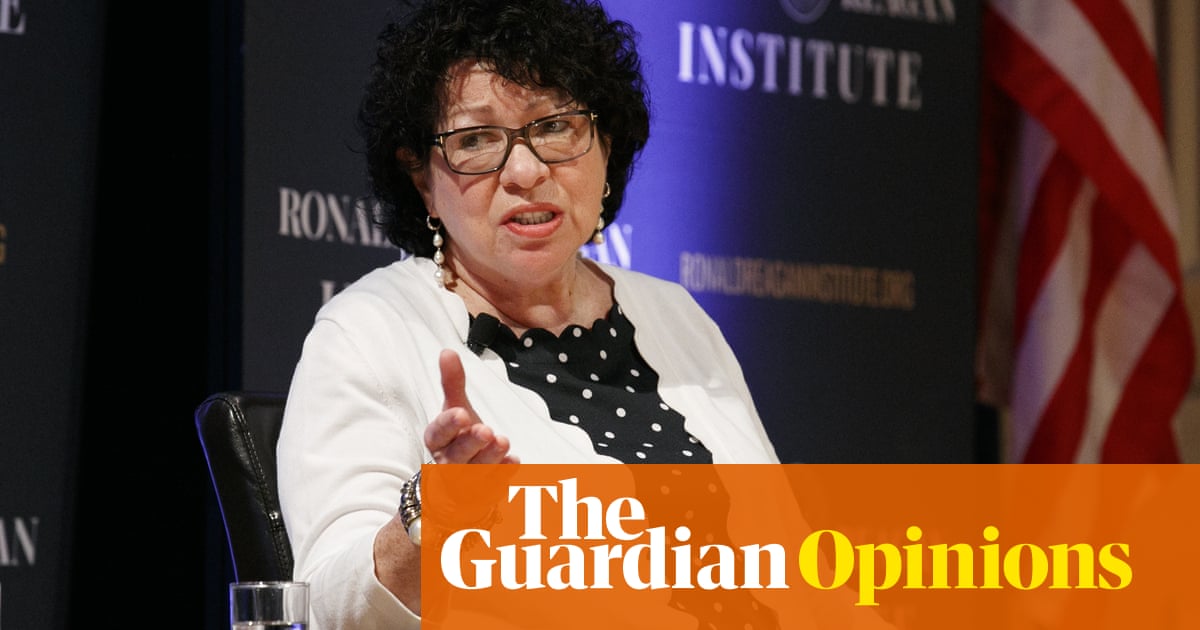 Along with various inalienable rights and governing principles, the tendency for men to talk over women has now been officially recognised by the US supreme court. Newly introduced rules to the structure of oral arguments are in place to address the issue of male justices and attorneys (extremely regularly) interrupting their female colleagues.

These measures were discussed last week by Sonia Sotomayor, who had the honour of being the most interrupted supreme court justice in the 2019 term. And they show that, far from being a mere everyday annoyance, “mansplaining” (or the ideologically adjacent “manterrupting”) can interfere with democracy. And the fact that, as a woman, you can be a literal supreme court justice and still get shouted down like someone’s little sister isn’t exactly encouraging.

For women, the experience of your whole side of a conversation being limited to short bursts – “But … ”, “Yes, and … ”, “Can I just … ” – is all too familiar. A 2014 study at George Washington University even found that, when speaking to women, men interrupt 33% more often than when speaking to other men.

But what does this constant interrupting look like outside of the rarefied confines of the judicial branch of US government? Here’s a nicely mundane example. I’m out for lunch with my partner, and we stop at a food truck. You know the type, overpriced “street food” that you have to hurriedly eat standing up, outside. Personally, I can’t get enough of them. My partner, who has coeliac disease, asks if a particular item on the menu is gluten-free. The food truck guy – a bearded Jack Black lookalike – says that, no, as it contains mustard, it also contains gluten. All mustard – according to him – is thickened with wheat flour. My partner, who has been checking ingredient lists meticulously for coming on two decades, knows this not to be true. Tentatively (she’s the non-confrontational sort), she corrects him. But no, Jack Black without the charisma disagrees. Suddenly this guy has a PhD in glutenology from the University of Mustard.

As Dr Food Truck rants about his credentials and expertise, my partner’s expression falls. Ordering food is often an ordeal for her, as people have either never heard of coeliac disease, or mistakenly think they know everything about it. What’s more, this guy is telling her that if she’s had mustard before, she’s “probably fine”. She – who was late diagnosed and spent her entire childhood in severe intestinal pain – tries to get a word in edgeways, but is steamrollered by someone clearly used to talking at women, uninterrupted. So I (the semi-confrontational sort) chime in. Not raising my voice, and keeping my tone as neutral as possible, I tell him that maybe, as an actual, certified coeliac, my partner knows what she’s talking about. Dr Food Truck tells me to “calm down”.

Women reading this will probably recognise it as a classic example of mansplaining. This, of course, is a term that has been in popular use (particularly online) since around 2009, and was named one of the New York Times’ words of the year in 2010. And it’s something women are on the receiving end of every time they’re interrupted and talked over by men who – on the basis of being men – believe they know better. And there’s little more simultaneously satisfying and galling than when some guy tries to get into it on Twitter with a woman talking about – say – The Matrix, and she turns out to be Lilly Wachowski, one of the film’s directors. Wachowski, in fact, has corrected men (including Elon Musk) a number of times on social media, on their deeply misogynistic interpretation of “red pilling” – a key element of the film. And many of these individuals have continued to argue with her, knowing that she and her sister, Lana, literally invented the entire concept.

Similarly, there have been several occasions on which men have tried to explain my own articles to me. In fact, if a man doesn’t see this, and then tries to mansplain mansplaining to me, I’ll be genuinely surprised. Or there was the time a male GP told me the pain I was in was “probably psychosomatic”, and then – unprompted – explained what he meant by “psychosomatic”. Usually I’m prepared to let medical professionals (male or otherwise) explain whatever they like to me. But being hit with “your symptoms are fake, and I’m going to convey this to you as if you were a child” is, in my humble womanly opinion, beyond the pale. What do you even say in such an instance? Still beats me. What I’ve learned as a woman is that if someone isn’t interested in your point of view, the dialogue is doomed from the get-go. We’re too often better off screaming into the void rather than trying to engage.

What’s really at stake when it comes to interrupting in order to mansplain is the respect (or lack thereof) for people’s lived experiences. There are many variations on the portmanteau. I’ve seen “whitesplaining” for white people who try to explain racism to Black people. Or “ablesplaining” for able bodied people who think – for whatever reason – they know more about being disabled than actual disabled people. Having a subject you know all too well explained back to you by someone misinformed (often someone with an agenda) is always going to suck. But hey, there’s plenty of void left to scream into, though you might get interrupted in the process.

Central Florida, Ian is coming. We’ll get through this