The meeting started before 9 a.m. and was attended by several members of the Marcos Cabinet.

In a short clip of the meeting shared by the Palace, Marcos wanted to start the meeting with the economic team led by Finance Secretary Benjamin Diokno.

“I ask what we call the economics group, which is the Secretary of Finance, the [Bangko Sentral ng Pilipinas] Governor, and the [National Economic and Development Authority] to give us a briefing on the general situation economically because I think we can all understand that the most important area that we will have to deal with would have to be the economy,” Marcos said.

“The central policy that everybody else would be following will be that set out by our economic managers. So I ask the economic team to give us a briefing,” he added. 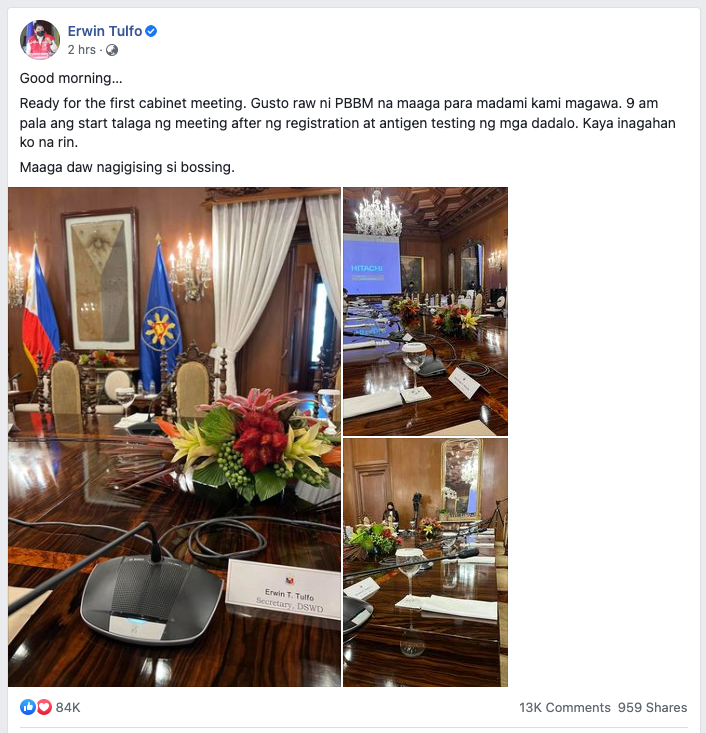 Vice President Sara Duterte, who also serves as education secretary, will attend the meeting, according to her spokesperson Atty. Reynold Munsayac.

In a press briefing on Monday, press secretary Atty. Trixie Cruz-Angeles said Marcos is now in the “final evaluation stage” in completing his Cabinet.

Netizens earlier pointed out that former President Rodrigo Duterte had his first Cabinet meeting the same day he assumed office on June 30, 2016.