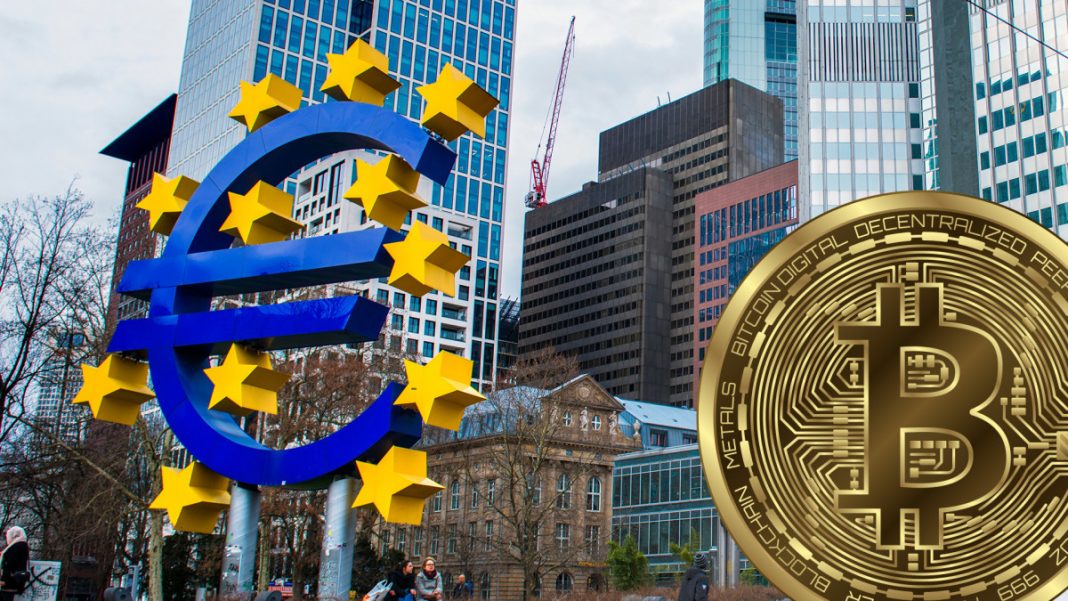 Then came the spring, when markets fell generally and cryptocurrency crumbled specifically. Inflation and interest rate hikes had investors spooked.

On July 1, a bitcoin’s value closed under $20,000, about half its worth at the start of the year. The Dow Jones Industrial Average was also down for the calendar year, but only 15%.

Bitcoin settled at around $20,000 through the late summer and early fall. Then, when major cryptocurrency exchange FTX crashed on Nov. 8, bitcoin’s value fell to just above $16,000, where it remained on Dec. 1.

The European Central Bank Piles On

With bitcoin (as well as other cryptocurrencies) in its most precarious position in years, the European Central Bank published scathing comments about the cryptocurrency on its blog.

Titled Bitcoin’s Last Stand, the post was written by Ulrich Bindseil and Jürgen Schaaf of the Market Infrastructure and Payments business area of the ECB.

“The value of bitcoin peaked at US$69,000 in November 2021 before falling to US$17,000 by mid-June 2022,” the authors write. “Since then, the value has fluctuated around US$20,000. For bitcoin proponents, the seeming stabilization signals a breather on the way to new heights. More likely, however, it is an artificially induced last gasp before the road to irrelevance.”

The commentary is brutal and wildly pessimistic, suggesting the worst about bitcoin, including assertions that the cryptocurrency is widely used for nefarious purposes.

“Bitcoin was created to overcome the existing monetary and financial system. In 2008, the pseudonymous Satoshi Nakamoto published the concept. Since then, bitcoin has been marketed as a global decentralised digital currency,” the authors say.

“However, Bitcoin’s conceptual design and technological shortcomings make it questionable as a means of payment: real bitcoin transactions are cumbersome, slow and expensive. Bitcoin has never been used to any significant extent for legal real-world transactions.”

Then the piece tries to take apart bitcoin as an investment opportunity.

“In the mid-2010s, the hope that bitcoin’s value would inevitably rise to ever new heights began to dominate the narrative,” the blog post continues. “But bitcoin is also not suitable as an investment. It does not generate cash flow (like real estate) or dividends (like equities), cannot be used productively (like commodities) or provide social benefits (like gold). The market valuation of bitcoin is therefore based purely on speculation.”

The Authors’ Arguments Are Disputed

The assertive commentary from the ECB did not go unnoticed on social media.

“The European Central bank (@ecb) covered Bitcoin on their blog today,” writes Twitter user @joel_john95. “It said bitcoin is ‘rarely used’ for ‘legal’ transactions. But offered no statistic to back it. So went down the rabbithole. Time for some numbers.”

“FWIW, the piece does not quantify anything. So idk whether ‘rarely used’ means anything.,” @joel_john95 says. “But one way to think of it is ±5-7% of global GDP goes to illicit transactions. If Bitcoin transactions do a multiple — sure, crypto is an instrument of ‘illegal’ transactions.”

“The latest stat for this actually comes from @chainalysis,” continues @joel_john95. “The last year was a landmark year in that value of ‘illegal’ transactions were at all time highs. But this stat is fueled by Bitcoin/ethereum prices being higher than usual. So as a percentage of crypto-GDP it is likely high.”

“Onchain transaction volume in 2022 surged roughly six times to ±15.6 trillion,” he writes. “Illicit transactions grew just 79%. This is in spite of the entirely new sectors that emerged in the market cycle (defi, nft, gaming). You would think more retail customers means more crime?”

Then @joel_john95 cuts to his main point by comparing illicit transactions for traditional currency with those for cryptocurrency.

“But the real world interacts in dollars, not Bitcoin,” he clarifies. “A different way to slice that data is to see what percentage of transactions were illicit. The report by Chainalysis suggests 0.15% of transactions were linked to crimes. Hmm. So 5% for traditional currency and 0.15% for crypto.”

To Fix Its Problems in Ukraine, Russia Turns to the Architect of the War