Are You Ready for Bitcoin’s Capital Flight into Other Cryptos?

It’s been less than 13 years since the creation of the world’s first and largest digital currency, but Bitcoin (CRYPTO:BTC) is already on its way to becoming a thing of the past. Sometimes in investing it’s best not to follow others’ footsteps. Early investors in Bitcoin spent years holding onto their coins amid skepticism, exchange hacks, and pump-and-dump schemes. Those who held on were entitled to the asset’s 33,769% return on investment since its inception.

But investors who are late to the game will probably not see those returns. So let’s look at why now’s the time to explore other cryptocurrency options instead of Bitcoin. 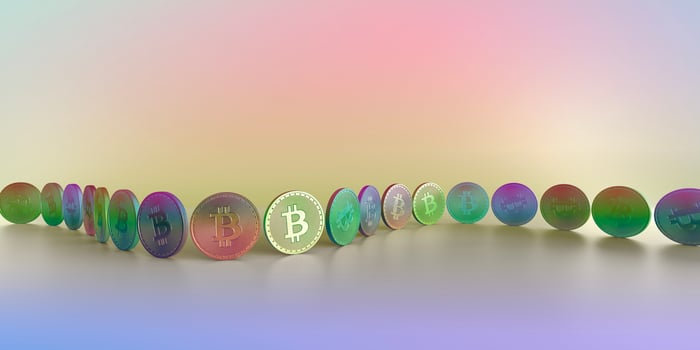 Bitcoin mining has pretty much gotten out of control. The surge in mining rigs over the years has caused the network algorithm to increase mining difficulty exponentially. Consider this analogy: Try opening a three-digit combination lock without knowing the passcode and not cheating by using a bolt-cutter. The puzzle here isn’t complex at all, but it takes a lot of brute force tries to figure out the right combination. It’s similar to miners verifying Bitcoin’s obfuscated transactions.

What’s different is that the difficulty is variable and can get to ridiculously large numbers. At the time of this writing, the total hash rate of the Bitcoin network is 126.2 million terahash/second, meaning that mining machines are making approximately 1 sextillion (or 10^21) guesses every second in search of the correct passcode.

So it’s a vicious cycle where as more participants join in to mine, more advanced mining machines are required to stay competitive, which results in even more electricity use. By the way, these next generation mining machines are called application-specific integrated circuit (ASICs), and their sole purpose is to forcibly guess the correct hash for Bitcoin transactions, so they’re useless for other digital purposes, like gaming with traditional GPUs.

But the current setup is already causing a lot of environmental fear, uncertainty, and doubt, known in the cryptocurrency world as FUD. To put it into context, one Bitcoin transaction (and that’s just one transaction, not one block) consumes as much energy as a person streaming online videos 24/7/365 for 15 years. The whole network uses as much electricity as 23 coal-power plants. Compare that to proof-of-stake (PoS) networks like Cardano (CRYPTO: ADA), which use less than 0.01% of Bitcoin’s energy.

The environmental FUD surrounding Bitcoin wouldn’t be a problem if a development team were behind it. For example, when concerns mounted about energy use on the Ethereum (CRYPTO: ETH) network, its team, led by founder Vitalik Buterin, released the London Fork update that sharply reduced mining rewards. Buterin also pledges to transform Ethereum into a PoS network by the end of 2022, which will reduce its energy use by 99%.

The same can’t be said for Bitcoin, as its founder, Satoshi Nakamoto, disappeared from the public eye after inventing the cryptocurrency. For the network to update itself, it requires the consensus of miners around the world. The latest one — the Taproot Upgrade — is the first in four years and will take place in November, mainly to implement smart contracts on the Bitcoin network. Other than that, the only way to improve the currency is through “civil wars,” that is, hard-forking into another currency with a different protocol like Bitcoin Cash.

But since miners are in control, it’s guaranteed that Bitcoin will never get the environment-friendly upgrade it desperately needs. No miner would want to see their capital expenditures into GPUs and rigs go to waste. That results in a vicious cycle.

Since Bitcoin’s launch, the cryptocurrency realm has moved well past that of establishing a peer-to-peer monetary network. There are over 11,000 cryptocurrencies, and pretty much all of them can do what Bitcoin does and more. For example, there’s the case of Chainlink that can link blockchain smart contracts to real-world APIs like financial or weather data. Then there’s Solana, whose network protocol is used to create decentralized finance apps. In addition, privacy coins such as Monero can shield the identity of parties along with transaction amounts, effectively solving Bitcoin’s non-fungibility problem.

Innovations are happening left and right in the sector, and Bitcoin just can’t keep up in time. Updates like Taproot require the consensus of an entire global community of miners, so it’s pretty much guaranteed to lag behind over time. Overall, I believe that Bitcoin is headed downhill from here. Check out other high-flying cryptocurrencies for investment potential.