More than 1,000 American passengers will spend Christmas Day stuck aboard a cruise ship after authorities in the western Mexico state of Jalisco blocked them from disembarking because 21 crew members have tested positive for COVID-19.

The Holland America Line ship sailed off from San Diego on Sunday with stops in the Mexican resort cities of Los Cabos and Mazatlán before it arrived on the coast of Puerto Vallarta on Thursday at approximately 7.30am.

The Jalisco state health department considered allowing each of the 1,035 passengers off the MS Koningsdam, which has at least 873 crew, as long as they turned in proof of negative COVID-19 tests, Mexican news outlet Milenio reported.

But, officials soon did a u-turn over fears that the outbreak could have spread further than the 21 infected crew members.

‘This option was discarded because the health protocols indicate that no one could disembark when positive cases were registered on the boat, so the decision was finally made not to disembark,’ the health department said in a statement.

The decision has frustrated passengers, with one, Paulette Laussane York, snapping a photo of the port city’s beach shoreline.

‘Puerto Vallarta from our veranda,’ she wrote on Facebook. ‘Mexican authorities won’t let anyone off our cruise ship, Koningsdam. Some crew members (fully vaccinated) tested positive for Covid. Ship is headed back out to sea.’ 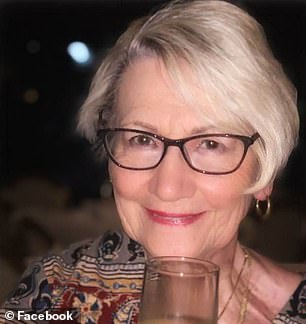 Beverly Carver-Percival (left) and Paulette Laussane York (right) share details of their experience aboard a cruise ship that was turned away from Puerto Vallarta, Mexico, on Thursday when 21 crew members registered positive COVID-19 tests 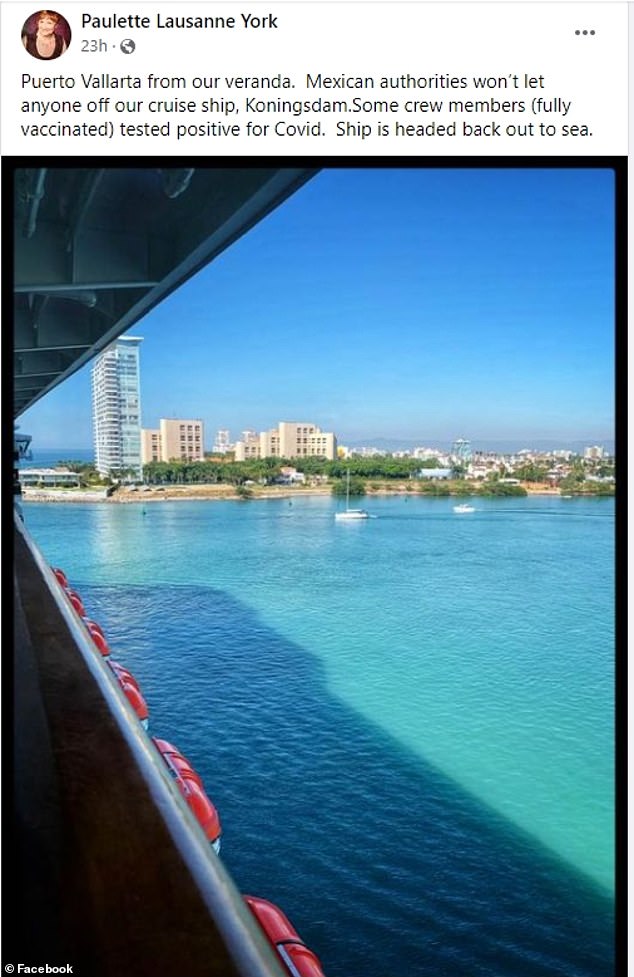 Paulette Laussane York took to Facebook on Thursday to share a photo of the shore of Puerto Vallarta, Mexico, after health officials there refused to allow 1,035 passengers aboard Holland America Line’s MS Koningsdam to disembark because 21 crew members had tested positive for COVID-19. Puerto Vallarta was the third and last stop of the cruise trip that took vacationers from San Diego to Cabo San Lucas and Mazatlán

It comes as the Omicron continues to drive a surge of new COVID cases across the US, with Christmas Eve seeing total infections edge closer to the all-time record.

Figures from Johns Hopkins University published Friday show there were 261,339 new cases in the last 24 hours, up 10 per cent from 238,378 the day before. 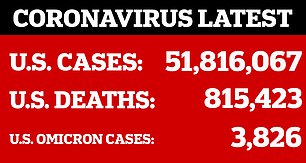 The number of deaths caused by the virus have also skyrocketed to 3,354, a 52 per cent increase from 2,204 fatalities on Thursday. That is the highest single-day total since October 13, when 3,054 fatalities were recorded.

American Omicron infections rose 45 per cent in a day, from 2,625 to 3,286. Those represent a tiny fraction of the true total, because the US only sequences a very small proportion of positive PCR tests to identify which strain caused a person’s infection.

The CDC estimates that at least 73 per cent of all new COVID infections are being caused by Omicron, with that figure as high as 92 per cent in five states including New York and New Jersey

The United States logged a seven-day average coronavirus case count of 168,981 on Wednesday, surpassing a summer peak of over 165,000 infections, according to the Washington Post. While worrying, the figure still falls well short of the 249,000 average hit in January 2020.

That marks the second largest surge in cases since the pandemic began nearly two years ago as the highly contagious Omicron variant has been detected in all 50 states, as well Washington D.C. and Puerto Rico.

Thousands of Americans have also been forced to spend Christmas alone after airlines across the US canceled more than 600 flights and delayed more nearly 2,500 on Christmas eve due to staffing shortages caused by surge in Omicron infections.

Onboard the Kongingsdam, all passengers were required to submit a negative coronavirus last Saturday, when one of the travelers returned a positive test for the virus. It’s not clear how many passengers have been infected.

Beverly Carver-Percival was among the passengers on the MS Koningsdam who took to social media to express their displeasure of not being allowed off the ship by Mexican authorities.

‘Well after a long trip we finally made it to Puerto Vallarta and due to Covid the Mexican Customs will not allow us to get off the ship,’ she wrote on her Facebook page on Thursday. ‘But what (a) beautiful trip we’ve had so far and maybe we will just make another trip out here without a cruise ship.’

Carver-Percival shared a screen shot of the trip’s itinerary which indicated that the ship was scheduled to arrive in Cabo San Lucas on Tuesday at 11:00 a.m. and passengers were due back aboard at 6:30 p.m. The ship had an arrival time of 8:00 a.m. in Mazatlán on Wednesday with travelers set to board at 4:30 a.m. 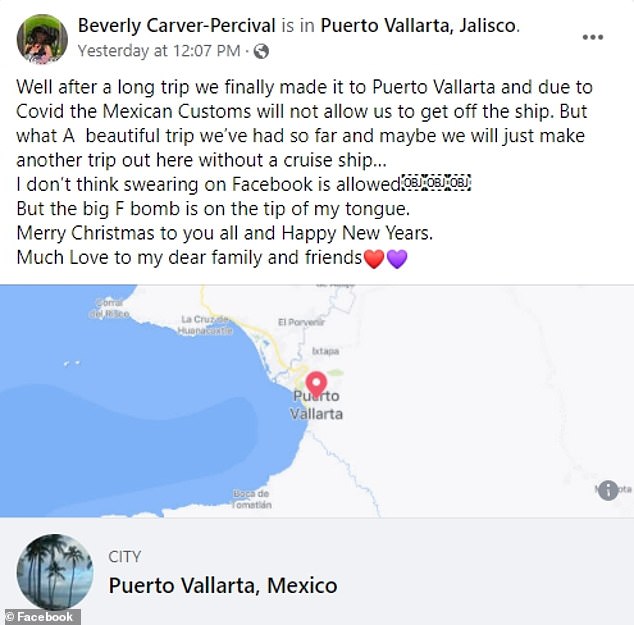 Beverly Carver-Percival and her husband are among more than 1,000 American passengers who will spend Christmas aboard a cruise ship with 21 crew members who have tested positive for COVID-19 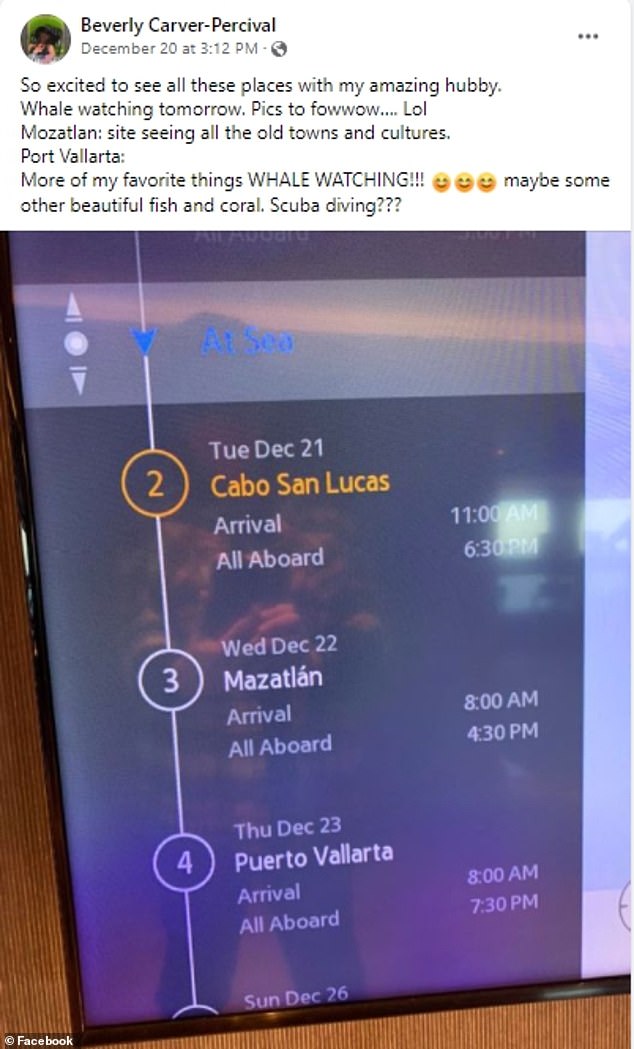 The cruise ship was set to dock in Puerto Vallarta at 8:00 a.m. on Thursday before health officials turned it away. It appeared that the cruise is scheduled to return to San Diego on Sunday.

‘I don’t think swearing on Facebook is allowed,’ Carver-Percival added. ‘But the big F bomb is on the tip of my tongue. Merry Christmas to you all and Happy New Years. Much Love to my dear family and friends.’

DailyMail.com reached out to Holland America Line for comment. 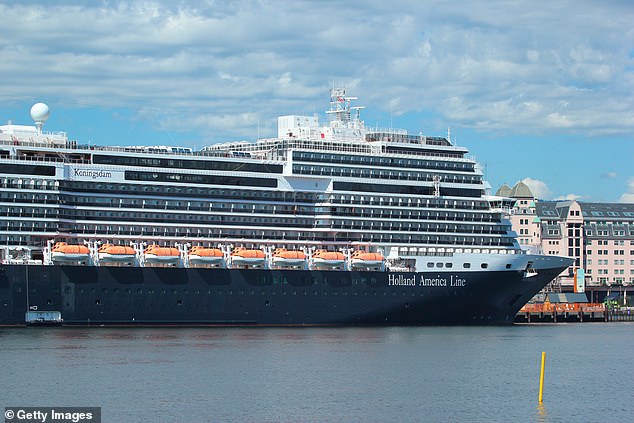 Holland America Line’s MS Koningsdam cruise ship was not allowed to dock in Puerto Vallarta, Mexico, on Thursday after officials in the resort city learned that 21 crew members had tested positive for the coronavirus

The spike in COVID-19 cases across the region has impacted three other cruise ships based out of South Florida this week.

A Carnival Freedom cruise was blocked from entering Bonaire and Aruba after some of the passengers and crew aboard the ship tested positive for the coronavirus.

The cruise has 2,497 passengers and 1,112 crew members and was scheduled to return to Miami on Sunday following an 8-day cruise. Passengers were required to be vaccinated and they were tested before leaving last Saturday, according to Carnival.

‘Carnival Freedom is following all protocols and has a small number on board who are in isolation due to a positive COVID test,’ the statement said. ‘Our protocols anticipate this possibility and we implement them as necessary to protect the health and safety of our guests and crew.’ 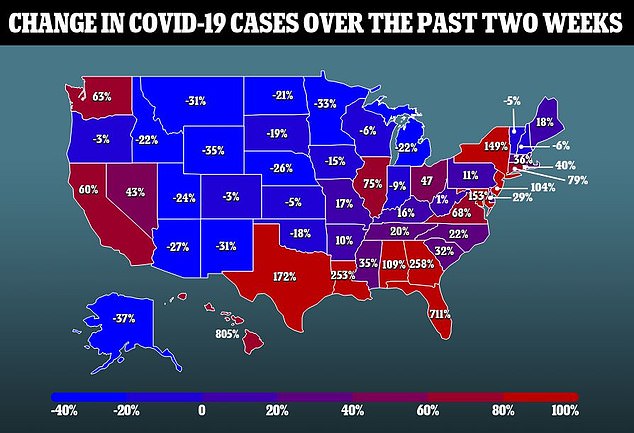 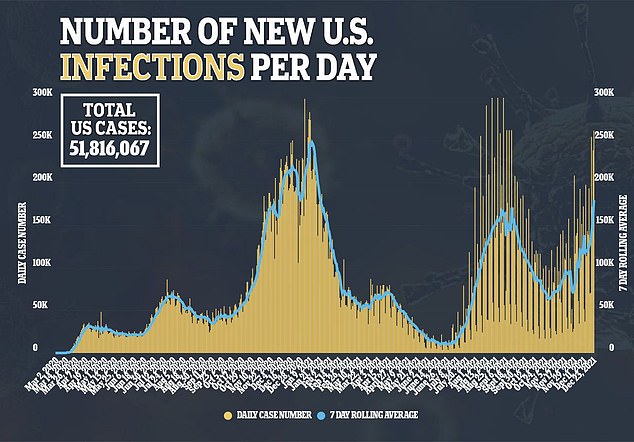 Ashley Peterson, a passenger on the ship, tweeted a photo of a December 22 letter from the ship’s captain apologizing for being unable to make the stops in Aruba and Bonaire.

All passengers will receive $100 per room in onboard credit and refunds for excursions planned at the two stops.

‘We know these unexpected changes are disappointing and impact your cruise vacation, however we trust you understand this is outside our control,’ said the letter from Capt. Mario Imbimbo.

It was the third outbreak this week affecting cruise ships operated by Carnival and Royal Caribbean departing Miami and Fort Lauderdale ports.