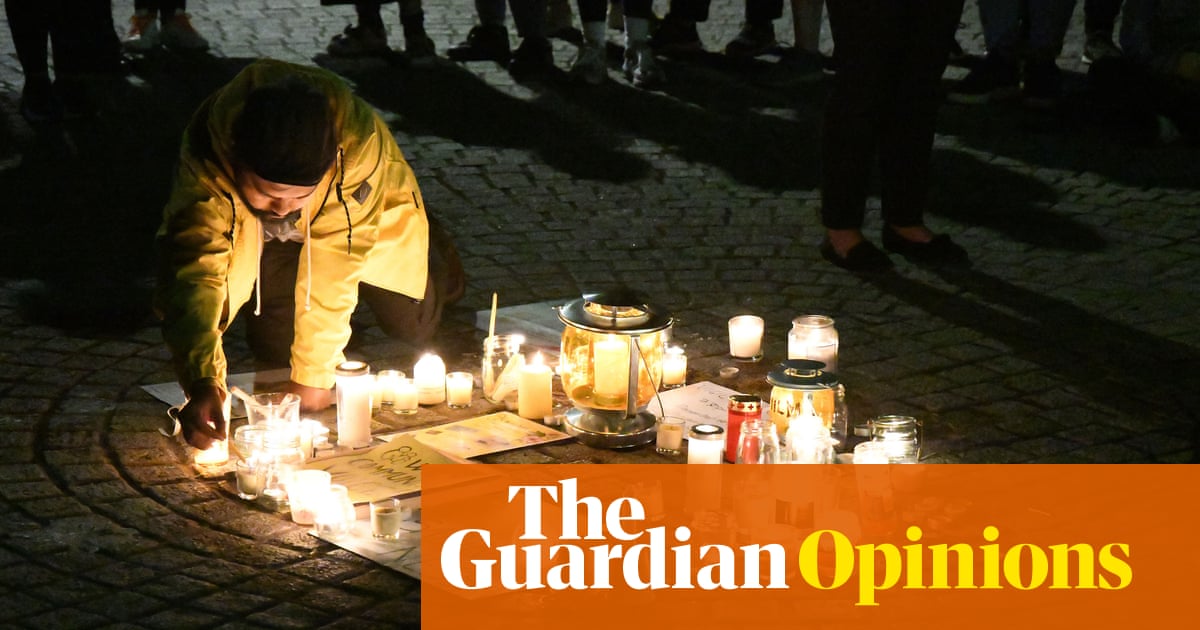 Cressida Dick must be the last woman in the country who thinks there may be “lessons” to be learned from Wayne Couzens’s rape and murder of Sarah Everard. At least 80 women in the UK have been killed by men since Everard. Only 1.6 per cent of rapes in England and Wales reported to police even result in a charge. Fifty-two per cent of police found guilty of sexual misconduct kept their jobs. Women already know all the lessons. Women live with the all-pervasive understanding that they are prey.

The women who love you have to communicate the fear to you when you’re still a girl, knowing that one day you too will have to communicate it to the girls you love. They pass you down their strategies – their defences – like your birthright. And when you’re big enough to be out in the world on your own, those same women spend their time hoping till it hurts that this fear, which they had to gift you out of love, will somehow save you. “In the evenings,” said Sarah Everard’s mother in her unforgettable victim impact statement, “at the time she was abducted, I let out a silent scream: ‘Don’t get in the car, Sarah. Don’t believe him. Run!’”

Where do you even start? When will it ever stop? On the very same morning that Couzens was being sentenced in one Old Bailey courtroom, another Old Bailey courtroom was being used to charge the man accused of the murder of the primary school teacher Sabina Nessa, brutally killed two weeks ago on her way to meet a friend near her home in south-east London. The prosecution alleged it was a predatory and premeditated attack on a lone woman not known to him.

To all those who could be found pointing out that “we” have to remember these are extreme cases: thanks for dialling in. They are extreme, yes – but they are part of a continuum of male harassment and the fear of it that women experience every day of their lives. Women are constantly, constantly performing risk assessment. Dare I pass down this street at this time? Is this the routine sleazy comment that turns into something worse? Is he going to keep walking or will he turn around? To make a troubled peace with it, we have to euphemise this lifestyle as “being sensible” or “taking care”, but it’s really just a statistically justified fear as part of daily life. Every woman has experienced various things along that continuum.

But wait! Because excitingly, it turns out there are now even more things for ladies to add to their list of Shit I’m Advised to Do to Stay Safe Because It Saves Anyone Else Having to Do Anything. Today, the Met advised people approached by a lone plainclothes officer to ask very searching questions, such as “Where have you come from?” and “Exactly why are you stopping or talking to me?” Probably best not to try these while being black. If they fear for their safety, women are advised to run into a house or “wave down a bus”.

To which, I am afraid, the only acceptable reaction is: NO. No to this bollocks, no to thoughts-and-prayers, and no to accepting this standard of policing – though that’s clearly what everyone from the prime minister to the leader of the opposition to the mayor of London does, if they’re happy for Cressida Dick to have just been given another two years on her contract after this many huge mistakes. Who looks at that record and thinks: you know what, I think we need the same old broom?

The message from women this week is loud and clear: no more learning. Our consciousness about male violence and how far it reaches is well and truly raised, and so is that of a vast number of men. That thing about having to devote 10,000 hours to something to be an expert in it? You really don’t have to be very old as a woman to have already spent way more than 10,000 hours thinking about your safety and, by extension, the safety of women in general.

So if anyone – ANYONE – in a position of authority would like to offer something more concrete than the equivalent of thoughts and prayers for how to tackle an epidemic of male violence and harassment, then let women reassure you: you don’t need to roll the pitch any more. Take it from us.

Alas, authority figures have not had a great week on this stuff. Or, indeed, a great few decades. When the Yorkshire Ripper’s killing pattern changed, a senior investigating officer made that infamous statement: “He has made it clear that he hates prostitutes. Many people do. We, as a police force, will continue to arrest prostitutes.” (And to use them.) “But,” he went on, “the Ripper is now killing innocent girls.” That comment rightly became notorious. And yet, I was sorry to see that even the judge who yesterday handed down a whole-life tariff to Wayne Couzens spoke of Sarah Everard being “a wholly blameless victim”, a way of putting it that implies that there are victims of rape and murder who have to shoulder some of the blame. Would police have made an arrest so quickly had Couzens’s victim been one of the sex workers he is alleged to have been in the habit of using?

If only the unfortunate echoes ended there. Peter Sutcliffe was nicknamed the Ripper as “a joke” by some of his colleagues at a trucking firm; Wayne Couzens was nicknamed “the rapist” by some of his earlier colleagues in the police service, also “as a joke”. I mean … I want to think there’s been some progress, but that particular detail suggests otherwise.

Certainly, there remains no major or even minor strategy to deal with this culture. We see Priti Patel down at Dover in a HOME SECRETARY coat, announcing action on asylum seekers arriving by boat. We hear Boris Johnson talking about a knife-crime strategy or a chain-gang strategy or an antisocial behaviour strategy. Could they please put their puffer jackets on to announce and follow through on a serious male violence strategy? Can we have a joined-up plan to tackle male violence that starts in primary education and takes an ambitiously holistic approach to a problem that riddles our society with poisons, from child abuse to terrorism?

If not, maybe all the people who fall back on the “one bad apple” defence can have the balls to stop omitting the second half of the saying. One bad apple spoils the barrel. And as any number of women can attest, this barrel is long past putrid.